Inspired by true events, EDDIE THE EAGLE is a feel-good story about Michael “Eddie” Edwards (Taron Egerton), an unlikely but courageous British ski-jumper who never stopped believing in himself – even as an entire nation was counting him out. With the help of a rebellious and charismatic coach (played by Hugh Jackman[1]), Eddie takes on the establishment and wins the hearts of sports fans around the world by making an improbable and historic showing at the 1988 Calgary Winter Olympics. 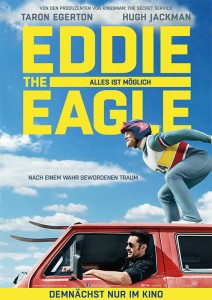 To prepare for the role, Taron Egerton did meet with the real-life Eddie, which helped inform his performance.

It actually took almost thirty years. One night, towards the end of 2014, Matthew Vaughn sat down to watch a film with his children. The film was Cool Runnings, the comedy about a Jamaican bobsled team that defied all the odds to compete in the 1988 Winter Olympics in Calgary.

“My kids were loving the film,” says Vaughn, “and I started thinking, ‘Why does nobody make movies like this anymore?’ I wanted to make a movie that you could watch and just come out feeling inspired. And I wanted to do a film I could show my kids!”

Perhaps spurred on by the remarkable coincidence that the Jamaican bobsledders and Eddie Edwards competed at the same Olympics, Vaughn turned his thoughts towards The Eagle. Fifteen years or so earlier, Vaughn and his then directing partner, Guy Ritchie, had been sent an Eddie The Eagle screenplay with a view to turning it into a movie. That deal hadn’t worked out, but something about it resonated with him. “I thought it was charming, and worth making. Loads of people had bought it since, but nothing had happened,” Vaughn explains. “I tracked down the script, said I wanted to buy it, and three months later we were filming.”

Vaughn quickly assembled his dream team both in front of and behind the camera. Deciding immediately that he didn’t want to direct, he turned to his old friend, Dexter Fletcher. Fletcher had starred in the first movie produced by Vaughn, Lock, Stock And Two Smoking Barrels, and the two had remained in touch ever since, during which both had become directors. Fletcher’s helming debut, Wild Bill, in particular, caught Vaughn’s eye.

Edwards’ exploits were solitary. Largely shunned by the ski jumping community, he would either train himself or go through a string of short-lived coaches. For the film however, Vaughn and Fletcher wanted to create a character to join Eddie through every step of his journey. “We needed someone we can relate to, a participant we can imagine ourselves to be,” says Fletcher. “Our attitude towards Eddie would be that he’s mad, but we’re won over by his inspirational enthusiasm and approach.”

Enter Bronson Peary, a hard-drinking, chain-smoking American and former ski jumper who takes Eddie, very reluctantly at first, under his wing. It was a role created for a movie star. And one of the benefits of being as successful as Matthew Vaughn is that you have movie stars on speed dial. Hugh Jackman[1], for one.

“I rang Hugh up and sent him the script,” says Vaughn. “He remembered Eddie The Eagle. He told me he used to jump off the roof of his house in Australia and pretend it was a ski jump! Hugh loved the idea of doing this. He’s never done anything like this before.”

A key part of Peary’s arc is his relationship with his former coach, Warren Sharp, who kicked Bronson out of the U.S. team all those years ago. But the character presented Vaughn and Fletcher with a casting challenge. “It had to be someone on a par with Hugh Jackman,” says Fletcher. “That’s Christopher Walken. When he came on set, it was just brilliant. What he does is so ‘Walken,’ but it’s powerful and moving, and means that Hugh’s character is more three-dimensional as well.”

Vaughn and Fletcher had their Bronson Peary. And they had their Warren Sharp. Now they just needed the biggest piece of the puzzle: the Eagle himself. As it happens, the hunt for Eddie didn’t take very long, because Vaughn realized he had the perfect candidate right under his nose. He had just put the finishing touches on Kingsman: The Secret Service, starring Taron Egerton, a young Welsh newcomer in his first film role. Egerton wasn’t even born when Edwards was soaring through the Calgary air, but the young actor quickly jumped at the chance. A test with Jackman in New York swiftly followed, before Egerton was officially offered the role just before Christmas 2014.

Egerton transformed himself for the role with the addition of a subtle wig, the trademark thick glasses, a little extra weight, a Cheltenham accent and, towards the movie’s end, Eddie’s iconic moustache. The young actor also learned how to ski for the role, in order to replicate the positions required for ski jumping.

To accurately depict Edwards’ training routine, and the big jumps he undertook at the Calgary Olympics, Fletcher and his director of photography George Richmond had to find a way of doing it safely, and repeatedly. “There are thirteen or more jumps in the film, and it’s always the same action – a guy goes up somewhere steep, he jumps off and then he lands,” notes Fletcher.“We had to find a lot of new ways to do that. And as soon as you get on a screen, everything becomes flat, and the height of something is reduced by 50 percent, at least.”

Other problems encountered by the production while on location in Germany and Austria, was amazingly, a lack of snow. “We were filming in spring and at the tail-end of a mild winter,” says Fletcher. “There was one shot where Taron goes to the top of the 70meter jump and looks down, and there was no snow! We had to bring some in from higher up the mountain in a truck, and spread it out around the slope.”