In 1970, Elvis Presley (Michael Shannon) flies to Washington D.C. with the goal of convincing President Richard Nixon (Kevin Spacey) to deputize him as a federal agent-at-large. Showing up unannounced at the Northwest Gate of the White House with his buddy Jerry Schilling (Alex Pettyfer), Presley persuades awe-struck guards to hand deliver a letter to Nixon requesting a secret meeting. White House staffers Egil “Bud” Krogh (Colin Hanks) and Dwight Chapin (Evan Peters) tell the president that a sit-down with Elvis during an election year could generate good PR, but Nixon is in no mood to humor the legendary rocker. 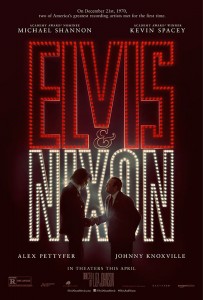 Spacey stayed in the Nixon zone throughout filming. He had this little monitor in front of him on set, and in between takes he’d watch old footage of Nixon.

The idea to make a feature film about the meeting between Elvis Presley and Richard Nixon was originally inspired by a portrait of an unsmiling Elvis, facing the camera and in profile, mugshotstyle, that hangs in the home of producer Cassian Elwes. At a Christmas party, Elwes’ longtime friend, Joey Sagal, also an Elvis impersonator, explained the story behind artist Russell Young’s silkscreened artwork. “He told me the picture was taken when Elvis secretly went to Washington and became an undercover narcotics agent,” recalls Elwes. “He said, ‘This is the official photograph from Elvis getting the badge.’ And I go, ‘What are you talking about?’ So Joey proceeded to tell the whole story.”

Encouraged by Elwes, Sagal, who appeared as Elvis in Steve Martin’s play “Picasso at the Lapin Agile,” and his then wife, Hanala, worked together on a first draft of Elvis & Nixon. Cassian’s brother, actor and screenwriter Cary Elwes, later expanded the script into its final form.

Essential to fleshing out the story were two first-hand accounts of the meeting and the events leading up to it. The memoir Me and a Guy Named Elvis, by longtime Presley confidant Jerry Schilling, became a road map for the writers in early drafts. The handwritten notes taken during the meeting by Nixon counsel Egil “Bud” Krogh, which he later compiled into his own account, The Day Elvis Met Nixon, were incorporated into the final draft.

After being approached by Wiersma to direct, Liza Johnson launched herself into the project fueled by a genuine love of the story and a strong rapport with Shannon, whom she had directed in the 2012 drama Return. Although she felt a strong connection with the characters in the script, she had no idea how much she would end up interacting with their real-life counterparts. “It was surreal to have historical figures on set while you direct actors representing fictional version of those characters,” says Johnson.

Acclaimed actor Michael Shannon didn’t know much about Elvis aside from his public identity when he was originally approached about the part. But producer Holly Wiersma, who had worked with Shannon on the 2006 thriller Bug, was relentless in her efforts to win him over. “I’d get stuffed animals that played Elvis songs and send them to his little girl, who was six years old,” Wiersma recalls. Eventually Shannon came to see the role as an opportunity to reshape public perception of an iconic American figure. “I never imagined myself playing Elvis in a million years,” Shannon says.

To get a better understanding of the man behind the aviator shades, Shannon visited Graceland and Memphis’ legendary Sun Studios, where Presley launched his recording career. He also traveled to the humble home of Presley’s youth. Shannon was also determined to capture the nuances of Presley’s distinctive speaking voice. “Jerry gave me an interview from this movie Elvis on Tour,” he says. “There were only about 30 seconds of Elvis talking, just two or three lines, but I listened to it constantly for the voice. One of the most intimidating things for me was that nobody really ever talked like Elvis. It’s not just a southern accent. I’d never heard an accent like it in my life. So on set I’d either be listening to my CD or thinking about Elvis.”

Kevin Spacey, who has twice been Emmy-nominated for his role as fictional president Frank Underwood on the Netflix drama “House of Cards,” was the filmmakers’ first choice to portray the real-life 37th president of the United States.

For Spacey, a longtime political junkie who recently narrated and executive produced the “Race to the White House” documentary series for CNN, the allure of re-enacting the Elvis-Nixon summit proved irresistible. “First of all, it’s a hilarious story,” he says. “And I couldn’t turn down the chance to work with Michael Shannon. He’s a great American stage actor, and he became so Elvislike that we had a great time shooting.”

Spacey prepared himself by taking a deep dive into Nixon’s behind-the-scenes persona before filming began. “I listened to hours and hours of recordings of Nixon’s phone conversations and private meetings in the White House,” Spacey says. “I was stunned by Nixon’s paranoia about people on the outside trying to destroy him. He had a tremendous distrust of the press and lots of enemies. It was kind of remarkable how grumpy he was as a person, and Nixon’s use of foul language was shocking. You just could not believe the kinds of things he said.”

While Elvis and Nixon command center stage, the movie includes a colorful array of real-life supporting characters. Jerry Schilling, the dominant member of Presley’s entourage, had final approval over the casting of his character. He submitted five names for consideration, including 25-year-old Alex Pettyfer. Once Wiersma offered him the job, Pettyfer spent as much time as he could with his real-life counterpart.