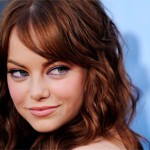 Emma Stone was then home schooled, so that she could audition during the day

Emily Jean”Emma” Stone (born November 6, 1988) is an American actress. Stone was a cast member of the TV series Drive, and made her feature film debut in the comedy Superbad (2007).  Stone is claiming her role as one of Hollywood’s most sought out actresses.

Stone was born in Scottsdale, Arizona, the daughter of Krista (née Yeager), a homemaker, and Jeff Stone, a contractor. She has a brother who is younger by two years.Stone’s paternal grandfather was of Swedish descent, and his family’s surname was anglicized to “Stone” when immigrating to the U.S. through Ellis Island; her ancestors also lived in Pennsylvania Dutch Country.

She was a member of the Valley Youth Theatre while growing up, a regional theater in Phoenix, Arizona, where she appeared in her first stage production, The Wind in the Willows, at the age of 11. Emma Stone attended Sequoya Elementary School and then Cocopah Middle School for sixth grade. She was home schooled for two years, at which time she appeared in 16 productions at Valley Youth Theatre, and performed with the theater’s improv comedy troupe.

Emma Stone launched a career in television after winning the role of Laurie Partridge on In Search of the New Partridge Family (2004), a VH1 talent competition reality show. The resulting show, The New Partridge Family (2005), only produced a pilot episode. Stone next had appearances in the television series Medium, Malcolm in the Middle and Lucky Louie. In 2007, she had a regular role on the Fox drama Drive, playing Violet Trimble, until the series was cancelled.

When she’s not filming, Stone, is an advocate for Stand Up To Cancer (SU2C), a groundbreaking initiative created to accelerate innovative cancer research that will get new therapies to patients quickly and save lives now. Laura Ziskin, the late producer of The Amazing Spider-Man, started the organization and got Stone involved. In addition to SU2C, Stone is also an ambassador for Gilda’s Club New York City. Named for Gilda Radner, the late comedian and original cast member of SNL, Gilda’s Club offers a place where people dealing with cancer can join together to build social and emotional support. Stone has become an active member in the Gilda’s Club community and continues to do so by engaging with their younger departments for children and teens.

Although known as a redhead, Emma Stone is naturally a blonde. She landed her first role as a teenager after dyeing her hair dark brown. Film producer Judd Apatow had her change from a brunette to a redhead for her role in Superbad.