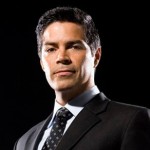 In 2005, Esai Morales (along with Mercedes Ruehl) received the Rita Moreno HOLA Award for Excellence from the Hispanic Organization of Latin Actors (HOLA)

Esai Manuel Morales, Jr. (born October 1, 1962) is an American actor known for his role as Bob Valenzuela in the 1987 biopic La Bamba. He also appeared in the PBS drama American Family and in the Showtime series Resurrection Blvd..

Esai Morales was born in Brooklyn, New York to parents Iris Margarita (née Declet), a union activist involved with the International Ladies’ Garment Workers’ Union, and Esai Morales, Sr., a welder. Morales began his pursuit of an acting career by attending the School of Performing Arts in Manhattan. His first professional performances were in theater and television in New York, and his first film—Bad Boys, about teenagers in prison—was released in 1983.

Morales has described himself as an “actorvist”, primarily as one of the founders of the National Hispanic Foundation for the Arts, taking inspiration from his mother. He is also interested in environmental issues and was a founding board member of E.C.O. (Earth Communications Office).

Esai Morales is a vegetarian. He and girlfriend Elvimar Silva welcomed a little girl, Mariana Oiveira, in September 2010.