Everything Must Go tells the story of Nick Halsey(Will Ferrell) a career salesman whose days of being on top are long gone. The same day Nick gets fired, for falling off the wagon one last time, he returns home to discover his wife has left him, changed the locks on their suburban home and dumped all his possessions out on the front yard. Faced with his life imploding, Nick puts it all on the line – or more properly, on the lawn – reluctantly holding a yard sale that becomes a unique strategy for  survival. Everything Must Go also stars Rebecca Hall, Christopher Jordan Wallace, Michael Pena and Laura Dern. 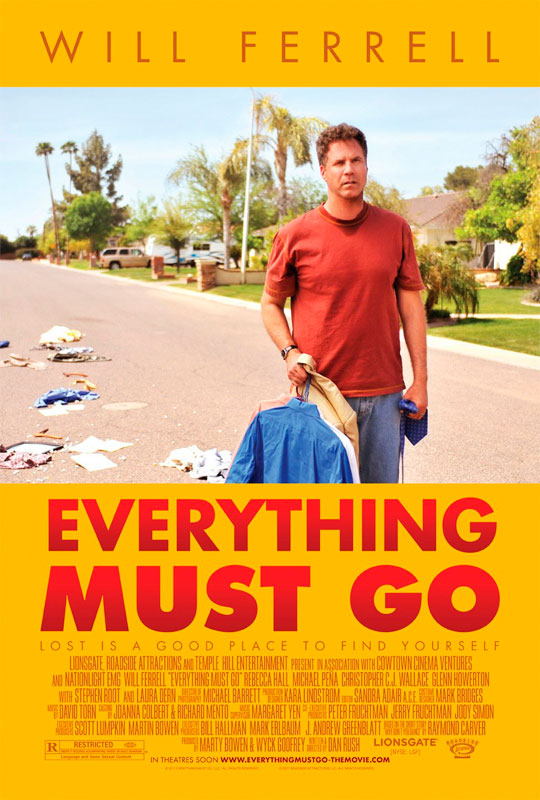 Will Ferrell was immediately attracted to the script: ”it constantly ebbs and flows between these extremely sad, serious moments and these situations that are really humorous…

Everything Must Go is a 2010 comedy-drama film directed by Dan Rush and starring Will Ferrell. The film is based on a short story byRaymond Carve.

When writer-director Dan Rush read Raymond Carver’s short story, “Why Don’t You Dance?,” he realized that he had found the source material he was looking for for his first feature.  He explains, “I thought I needed to write something with a great role for an actor.  Here was the tale of a man whose marriage falls apart and who finds his belongings dumped out in his yard. He then rearranges the furniture on his front lawn so that he can watch television and listen to his record player.  In ‘Why Don’t You Dance,’ you have a situation where everything is stripped away and you have no belongings, no friends, and in this case you have a problem as well, an alcohol problem, what do you do? And to me, I think that that’s the definition of character.”

Beginning with the simple three-person story, he introduced new characters to populate the film, including Kenny (played by Christopher Jordan Wallace), an awkward young kid who helps Nick conduct his yard sale and Samantha (played by Golden Globe nominated actress Rebecca Hall), the neighbor who helps him to realize that not everything is lost. From the depths of despair, Nick is able to find  hope. As producer Marty Bowen puts it: “he starts to consider reassembling the pieces to his life, and gets to know the neighbors in his neighborhood, this very bucolic neighborhood, who he’s never really known before as human beings.”

Filming took place in Arizona, notably Phoenix and Scottsdale. The film was released September 10, 2010 at the Toronto International Film Festival as well as the London Film Festival on October 15.