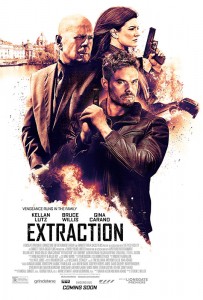 EXTRACTION is the fourth action film from producer Randall Emmett, the co-founder of Emmett/Furla/Oasis Films (E/F/O) and longtime producing partner George Furla, and Aperture’s Adam Goldworm, the production team behind the action films The Prince, Rage,and Vice. All four films feature Bruce Willis and were shot on accelerated shooting schedules, three of them on location in the city of Mobile, Alabama.

In Extraction Kellan Lutz plays rookie CIA analyst Harry Turner, who wants to become an international spy like his father veteran agent Leonard Turner, played by Bruce Willis. “Harry Turner is a CIA analyst who really wants to be a CIA in-field agent,” said Lutz, best known for his role as Emmett Cullen in the blockbuster Twilight and its sequels.

When director Steven C. Miller (Submerged) first read Extraction he was excited by what he described as a “thriller with super weapons and conspiracies.” He saw the action in this fast-paced tale of betrayal, revenge, redemption, and romance, set in the world of international spies as “more intimate, more personal” than most of the action in today’s popular effects-and-gun-filled action blockbusters. “It’s not a gun movie, in the sense there’s not a lot of gun play,” said Miller. “I wanted this movie to be more hand-to-hand combat, more close quarters, tighter.”

Miller worked with director of photography Brandon Cox and renowned stunt coordinator Simon Rhee to create a pace in Extraction that gave the audience some room to breathe. According to Cox, Miller sought to establish what he calls a “slow-calm” rhythm to the film.

With a 17-day, six-days-a-week shooting schedule, a half-dozen major fighting sequences, and a couple of car chases to film, Miller worked closely with Cox, Rhee, and his assistant directors Jonathan Southard and Karla Strum to maximize his on-set time and post-production options by shooting with multiple cameras, including the Alexa XT® and Ari Alexa® cameras (with the 433 sensor) with Hawk® anamorphic lenses. A camera drone was used to capture night aerials of Drake’s SUV driving through the city streets.

The 6’1” Lutz says he enjoys character roles that are physical and offer the opportunity to do some onscreen stunt work and expand his skill set. Most recently, Lutz co-starred alongside a virtual pantheon of onscreen action heroes in The Expendables 3[3], and underwent months of rigorous physical training to portray the world’s strongest man as the titular character in, The Legend of Hercules[4]. Lutz said he learned some new skills working with stunt coordinator Simon Rhee and the 87Eleven stunt guys. “I have a good knowledge of Muay Thai and Brazilian Jui Jitsu and we did training in both of those and judo,” said Lutz.

Actor and stuntman Dan Bilzerian portrays Agent Higgins, the agent tasked with minding Harry witnessed first-hand Lutz’s transformation from desk jockey to ass-kicking agent, while filming their fight scene in the van when Harry escapes from the agency.

Miller says while screenwriters Umair Aleem and Max Adams did a great job writing key details to parts of the fights, but action in a screenplay is usually just an outline. “The script says: ‘Harry kicks ass.’ So, you’ve got to sit down and figure out the details of exactly what that ass-kicker’s doing. Simon and his team are the best at doing that.”

After Harry goes rogue in the search for his father, the CIA dispatches a team of field operatives including Harry’s ex, Agent Victoria Phair, portrayed by actress Gina Carano. Widely considered the original face of Women’s Mixed Martial Arts, Carano gets some onscreen action time in Extraction, using her martial arts skills to quickly dispense bad guys and obstacles with precision and speed. Currently ranked as the third best female fighter in the world with a 7-1 record, Carano left fighting years ago, but still enjoys doing stunt work.

Extraction was filmed entirely in Mobile, Alabama. For the first nine days of shooting, the production base was the former Armstrong Tile Plant on Baker Street. The huge abandoned factory a few miles out of the city center served as a versatile backdrop where Miller, Cox, Rhee, production designer Nate Jones and their team transformed dark empty spaces inside the cavernous factory into several sets and locations including: the hotel basement where Leonard kills Dimitri after his cover’s blown; the bathroom of The Lodge nightclub where Harry fights an assassin; and, the boxing gym, Jui Jitsu academy, pistol qualification course and indoor shooting range where Harry trains.

The scenes at the steel mill during the film’s climatic final sequences were also filmed inside and outside the Armstrong plant, including when Harry-Robertson car chase and crash, in which both actors did much of their own driving.

Bri’s Apartment, where Victoria gets some club clothes to wear to The Lodge, is a private residence in the 400 block of Dauphin St. and the interiors of The Lodge Nightclub where Harry and Victoria find Drake were filmed in the Skyview Bar on the top floor of the Holiday Inn on Government Street in downtown Mobile.