Fioravante (John Turturro), at his friend Murray’s (Woody Allen) suggestion, enters into the world’s oldest profession, and ends up finding something he didn’t know he was looking for. 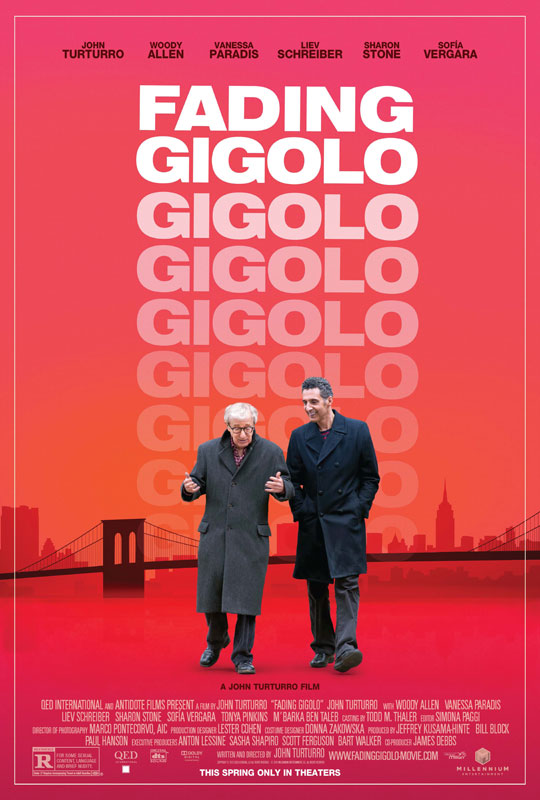 The seed of this scheme is planted when Murray’s beautiful dermatologist Dr. Parker (Sharon Stone) mentions she’s looking for a man to participate in a ménage à trois with her and her equally gorgeous friend Selima (Sofia Vergara).

The idea for John Turturro’s new comedy Fading Gigolo first surfaced in a playful improvisation he did for a friend’s amusement over lunch. “I was just riffing, and then he kept laughing and I kept going more with it,” says Turturro. It was only afterwards that he started to think this concept might be something worth exploring further. He talked about it to a few friends, including his barber. The barber mentioned it to another of his customers who happened to be Woody Allen. Allen loved the idea so much he, in turn, reached out to John. At this point Turturro didn’t have much more than the basic story.

Fading Gigolo marks one of the rare occasions in which Woody Allen acts in a film by another director. “I have great respect for John’s work as a director and an actor, and I felt this was a role that was within my range,” says Allen. “If John had given me a script where I had to play a policeman or something, I wouldn’t have been able to do it, because I’m not really an actor, but this was something I could handle.” Turturro and the rest of the cast do not share Allen’s modesty about his talents. “When you’re acting opposite him, you see how fantastic he can be,” says Turturro.

Allen had some trepidations about acting opposite Liev Schreiber. “I was a little nervous before I did a scene with Liev because I’d seen him on stage and I find him to be such a tremendous actor, and I thought, ‘Is he going to roll his eyes the minute I start to speak and think, ‘who did they stick me with here?’”

Sharon Stone and Turturro had worked with before, although they had no scenes together. “Sharon has a vulnerability to her,” says Turturro. “She’s the right age for the part, she’s very smart, she looks great—there’s something very athletic about he —I needed somebody you could imagine lived on Park Avenue. I think that we had a nice chemistry together.”

Award-winning French actress and international singing star Vanessa Paradis makes her debut in an English-speaking role with Fading Gigolo. “It’s a wonderful role, but for her I think it was much more than that—it connected deeply with her,” says Turturro.