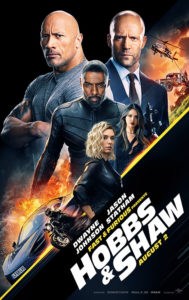 Filming of the Samoa sequence began in January 2019 after filming
wrapped in London for the holiday hiatus. Leitch, Dwayne Johnson, Jason Statham, Idris Elba and Vanessa Kirby were joined by a handful of British crew members who happily left the cold, gray weather of London to join the U.S.-based film crew on the Hawaiian island of Kauai.

Hobbs & Shaw writer/producer Chris Morgan, the franchise’s longtime narrative architect, began his tenure with the series on director Justin Lin’s The Fast and the Furious: Tokyo Drift, the third installment, which reinvigorated the franchise. Morgan transformed the underground street-racing cowboys into reluctant fugitives pulling off high-stakes heists on the international stage, and then upped the ante with next-level exploits and deadly new adversaries.

With Dwayne Johnson and Jason Statham on board as stars and producers, the focus turned to developing the screenplay. The theme of family has always been one of the unifying threads that weaves through the Fast universe. That theme takes center stage in Hobbs & Shaw and shapes the decisions and motivations of both lead characters.

The filmmakers now shifted their attention to securing a director with the vision and the depth and breadth of skills necessary to harness the enormous scale, action, character detail and humor of Hobbs & Shaw.

In David Leitch, the producers knew they found a director with the versatility to do it all. Leitch’s recent hit box-office trifecta of Deadpool 2, Focus Features’ Atomic Blonde and John Wick (co-directed with Chad Stahelski) proved that he could navigate a mix of genres and infuse the film with a fresh new cinematic take on action and character-driven story. It’s a rare combination of qualities for a director, but Leitch himself is a rarity.

Although Fast fans already know Hobbs and Shaw, David Leitch wanted to re-introduce them on their own terms and establish their lives away from the rest of the Fast team. The first scene in the film hilariously contrasts Hobbs’ laid-back life in California with Shaw’s extravagant life in London, using a split screen to highlight just how opposite these two heroes are.

“The opening sequence is really clever and is one of my favorite little moments of the movie,” Statham says. “It’s spot-on because Hobbs and Shaw are so different yet so similar. I think it’s a tightrope that Dave walks rather well throughout the film.”

With every new chapter in the Fast franchise, the stakes are exponentially higher, and the villains exponentially more indomitable. On the surface, Hobbs and Shaw are both such fierce warriors that, as a team, they should be able to handily defeat any foe. Hobbs is all powerful brawn while Shaw possesses a lethal elegance. On paper, they should be unstoppable. So, the filmmakers needed to create a new type of nemesis unlike any in the history of the franchise—a mold-breaking adversary worthy of these two fearless heroes.

Finding an actor who could embody Lorr’s intelligence, raw power and intensity, and who could also plausibly convey a very real threat to Dwayne Johnson and Jason Statham on screen, seemed, at first, like an impossible task, but Idris Elba (Thor: Ragnarok, Luther) has built a body of work doing the impossible. “When Idris’ name came up, we all got really excited,” David Leitch says. “He’s the full package. He’s physically imposing; he can do action. Plus, his acting chops are off the charts. You know he’s going to bring this pathos and gravitas to the character while making him both formidable and emotional. These are all the traits you need in a great villain.”

Although key scenes for Hobbs & Shaw were shot in Hawaii and Los Angeles, most of the filming took place in the United Kingdom, in locations ranging from London to Glasgow, to a powerplant near Doncaster in South Yorkshire.

One particular location seriously wowed the cast and crew: a night shoot in front of St. Paul’s Cathedral, the dome of which is an iconic fixture of the London skyline. Director of photography Johnathan Sela and his department lit the historical church as the stunning backdrop to a helicopter landing—a first in London—as part of the riveting sequence in which Hattie and her tactical team initiate their covert mission to liberate The Unicorn.