Filmmaker Jon S. Baird felt a very personal connection to the world of FILTH from the moment he picked up the book. Irvine Welsh’s much-loved novel recounts the story of not only one of the most iconic, foul-mouthed, irate and downright hilarious policemen in modern fiction, but also one of the most tragic. 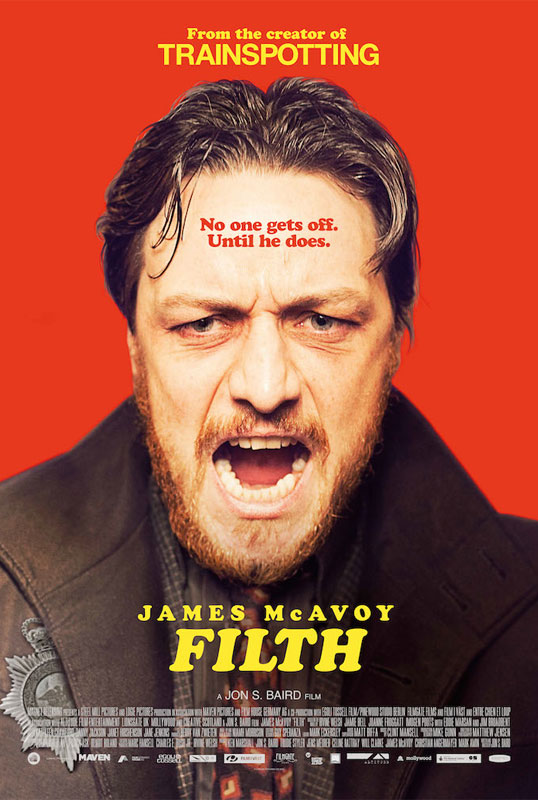 The filmmaker met Irvine Welsh at the June 2008 launch of the unofficial sequel to FILTH, Crime, which follows Ray Lennox, one of the supporting characters from FILTH (played by Jamie Bell), after he becomes a Detective Inspector.

For writer-director Baird, who made his name with his acclaimed directorial debut Cass, it was the decline in Bruce’s mental wellbeing that resonated most of all. “I scripted Bruce in a particular way because I grew up with someone who had bipolar disorder” Baird explains. The film rights had resided with another production company, though reverted to Welsh, “and when Irvine and I spoke again in August 2008, the book option had become available,” the writer-director adds. Baird and producer Ken Marshall then travelled to Welsh’s home to finalize the deal.

Once the book was optioned the producer-director team had a very clear vision for their adaptation, which Baird would bring to life with the screenplay. “I think previous attempts at an adaptation had tried to do it as a quite literal translation, in terms of it being really dark and gritty, more like a thriller and more of a social realism approach” says Baird. “But, while the story is a tragedy and has an extremely tragic central character, I thought the book’s black humor was the key to unlocking a more cinematic adaptation.”

The central character in FILTH is one of the most memorable in modern British fiction. Detective Sergeant Bruce Robertson introduces himself as an unashamed emotional hardnut and the master of most of what he surveys. To cast the right Bruce Robertson the filmmakers turned to acclaimed Scottish actor James McAvoy, best known for the likes of The Last King of Scotland, Atonement, Wanted, X-Men: First Class and Trance.

As much as he liked the script, McAvoy says that he wanted to make sure that the filmmakers had chosen him “for the right reasons.” He notes, “Sometimes filmmakers want you just because they think you can help get things financed.” McAvoy is certainly a name that inspires financiers but the actor says that he trusted Baird and Marshall’s integrity.

The whole story unfolds in Edinburgh, with a small section in Germany, the filmmakers shooting in Stirling, Glasgow, Belgium, Hamburg and in Trollhättan in Sweden, as well as Scotland’s capital, though Baird believes that, “The locations and time period could be anywhere. The setting is not vital to the story we wanted to tell.”

The municipal building in Stirling not only provided the setting for the police station, incorporating Drummond and Bruce’s showdown, but also for the scenes with Bruce and Bladesey at their Masonic Lodge. It also housed some of the fantasy sequences; the hilarious Usual Suspects’ style police line-up, and Drummond’s sexy walk down the row of naked policeman.