Set in 1940s New York, Florence Foster Jenkins is the true story of the legendary New York heiress and socialite who obsessively pursued her dream of becoming a great singer. The voice she heard in her head was beautiful, but to everyone e lse it was hilariously awful. Her “husband” and manager, St. Clair Bayfield, an aristocratic English actor, was determined to protect his beloved Florence from the truth. But when Florence decided to give a public concert at Carnegie Hall, St. Clair knew h e faced his greatest challenge. 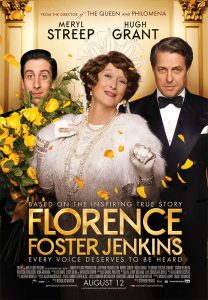 When it came to preparing for the shoot, Meryl Streep was required to master the art of singing badly. Streep train ed as a singer and, as Stephen Frears points out, “ to be able to sing badly you first have to be able to sing well”.

It was the glorious chasm between Florence Foster Jenkins’ self – belief and her startling failings as a singer that immediately hooked writer Nicholas Martin. “I heard a song on YouTube,” says the writer. “I was struck by the sincerity of her voice and I found it very moving, very funny and very sad. I kept going back to listen to it and wanted to find out about her life. It was then I realised the story of her journey to performing at Carnegie Hall would make a compelling musical film.”

Six month s after beginning his research, Martin had a screenplay. “A friend told me producer Michael Kuhn knew a lot about music so we sent it to him. He liked it and Stephen Frears soon followed. I said only one person can play Florence and that’s Meryl Streep, otherwise we might just as well go home. When Michael rang me and said, congratulations you’ve got your movie; I knew what he meant immediately. It was a miraculous moment in my life! We had to wait for her to be available but that gave us time to really work on the script and made it much much better.”

The appeal of Martin‘s screenplay was immediate for Michael Kuhn. “ When you read a script you’re looking for somet hing that’s different and emotionally satisfying and I thought this was a mixture of funny and touching,” explains the producer. “I couldn’t imagine anyone but Meryl Streep playing the part of Florence, so the next thing was to ask how would we get to Meryl. So we sent it to her agent and she came back quickly and said she wanted to do it. It’s often the case with good material that the film comes together quickly. ”

The film came together extremely quickly as director Stephen Frears comments: “ Nicholas must have been amazed as we all jus t turned up and said yes – me, the producers, Meryl and Hugh. It doesn’t usually happen as easily as that. But his screenplay is grown up, it’s mature. Nicholas wrote with an eye to people having a good time so he was always conscious of entertaining peopl e as he wrote it. ”

Similarly, as soon as Cameron McCracken read the script at Pathe, he agreed to come on board to finance and distribute the film. It marked his fifth collaboration with Stephen Frears and his producer Tracey Seaward; his third with Mery l Streep; and his second with Michael Kuhn.

For her part Meryl Streep was familiar with Florence Foster Jenkins, but it was the prospect of working with Stephen Frears that most appealed. “ I have a vague memory at my first year of drama school of people passing around a recording of Florence singing. I remember some sort of screech that we were all screaming about. Stephen called me and said ‘ I have a part for you, it’s the worst opera singer in the world ’ and I was t hrilled. I said yes before I read the script because I’ve always wanted to work with Stephen. He has a reputation among actors as someone you really want to work with. ”

Once Meryl Streep had committed Frears then went to Hugh Grant. “I told him I’d found something I thought he’d like, and he said yes within three days too,” he says. The film marks the second collaboration between Grant and producer Michael Kuhn following their first over twenty years ago.

The third character in the unique ménage that makes up the film is Cosme McMoon, Florence’s piano accompanist. Simon Helberg, best known for the American television series “ The Big Bang Theory ” was cast in the role. Helberg came to the film not knowing anything about the characters but the screenplay and the chance to work opposite Meryl Streep an d Hugh Grant and with Stephen Frears sealed the deal for him.

Filming took place in the UK, with Liverpool standing in for New York. The two main concert set – pieces were both filmed in London, Carnegie Hall at Hammersmith Apollo and the Ritz Carlton at the Park Lane Hotel. As Frears explains, “ You couldn’t make it in New York now as it doesn’t look like the 1940s anymore. ” For production designer Alan Macdonald, the film was a creative pleasure. “ 1940s New York is like Christmas and birthdays come at once for a designer!”

For Florence’s performances in public at the Ritz Carlton Macdonald opted for the stunning art deco ballroom of London’s Park Lane Hotel. “We added a tacky jewellery box effect for when the curtains opened,” says Macdonald. “in contrast to the beautiful room around it. We were able to film there just before they started renovations and so we were more or less able to do what we wanted.”