Food, Inc. is a 2008 American documentary film directed by Emmy Award-winning filmmaker Robert Kenner. The film examines corporate farming in the United States, concluding that agribusiness produces food that is unhealthy in a way that is abusive of animals and environmentally harmful. The film is narrated by Michael Pollan and Eric Schlosser. 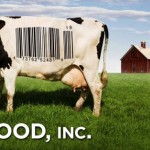 The documentary generated extensive controversy, in that it was heavily criticized by large American corporations engaged in industrial food production.

The film’s first segment examines the industrial production of meat (chicken, beef, and pork), calling it inhumane and economically and environmentally unsustainable. The second segment looks at the industrial production of grains and vegetables (primarily corn and soy beans), again labeling this economically and environmentally unsustainable.

The film’s third and final segment is about the economic and legal power of the major food companies, such as food libel laws, whose livelihoods are based on supplying cheap but contaminated food, the heavy use of petroleum-based chemicals (largely pesticides and fertilizers), and the promotion of unhealthy food consumption habits by the American public.

The film has generated controversy for its views. The producers invited on-screen rebuttals from Monsanto Company, Tyson Foods, Smithfield Foods, Perdue Farms, and other companies, but all declined the invitation. Monsanto says it invited the filmmakers to a producers’ trade show, but they claimed that they were denied press credentials at the event, and were not permitted to attend. An alliance of food production companies (led by the American Meat Institute) created a website, SafeFoodInc.org, in response to the claims made in the film.

Monsanto also established its own website to specifically respond to the film’s claims about that company’s products and actions.Cargill told the Minneapolis Star Tribune that the company welcomed “differing viewpoints on how global agriculture can affordably nourish the world while minimizing environmental impact, ensuring food safety, guaranteeing food accessibility and providing meaningful work in agricultural communities.”But the company criticized the film’s “‘one-size-fits-all’ answers to a task as complex as nourishing 6 billion people who are so disparately situated across the world.”

Fast-food chain Chipotle responded to the documentary in July 2009 by offering free screenings of it at various locations nationwide and stating that it does things differently, which it hopes customers will appreciate after seeing Food, Inc.

The film’s director, Robert Kenner, has denied attacking the current system of producing food, noting in one interview: “All we want is transparency and a good conversation about these things.” In the same interview, he went on to say, “…the whole system is made possible by government subsidies to a few huge crops like corn. It’s a form of socialism that’s making us sick.”