The epic action-drama Free State of Jones tells the extraordinary story of a little known episode in American history during which Newt Knight, a fearless Mississippi farmer, led an unlikely band of poor white farmers and runaway slaves in an historic armed rebellion against the Confederacy during the height of the Civil War. 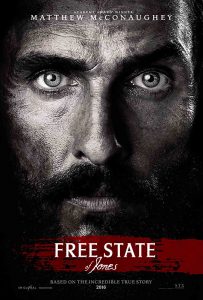 To populate the film’s myriad battlefields, swamps, and towns, New Orleans-based extras casting director Brent Caballero, whose credits include 12 Years a Slave, cast a total of 2,800 local extras as background performers for all the various Civil War-era roles, including confederate and union soldiers, slaves, servant orderlies, doctors, farmers, Klansmen, and general townspeople, as well as for the more modern Jones County courthouse scenes.

Free State of Jones is written and directed by four-time Oscar® nominee Gary Ross, based on his decade-long independent research—from a story by Ross and Leonard Hartman, and produced by Ross through his Larger Than Life Productions shingle, along with Scott Stuber andJon Kilik. Diana Alvarez is co- producer.

Free State of Jones has been a project of intense passion for writer/director Gary Ross for 10 years. Ross, who began his film career as the screenwriter of the beloved comedy Big, starring Tom Hanks, and the political comedy Dave starring Kevin Kline (both of which earned him original screenplay Oscar nominations), is a lifelong student of politics and American history. Soon after the release of Seabiscuit, Newt Knight’s story came to the filmmaker’s attention. There had only been a handful of books and and one misrepresentative Hollywood film about Knight and his rebellion.“When I first learned of the story of Newt Knight,” Ross recalls, “it was amazing to me that this unique hero had been kind of lost to history.He is known in certain places in the South, and he’s certainly known in Mississippi, but he’s not as widely known as he probably should be, considering he led a rebellion against the Confederacy and in many ways was 100 years ahead of his time.”  Ross was immediately attracted to the character and set out to learn more about the man, convinced there must be more to the story than had been recorded.  As Ross would come to discover, what was less known about him was even more remarkable.

Ross wanted to tell Knight’s story, because, as he says, it illustrates that the South was not entirely unified in its support of the Confederacy or slavery, that indeed many southerners were morally opposed to slavery and willing to stand against it. Ross was also passionate to presentlife in the South after the war, and throughout Reconstruction. Very few of the plethora of films and television programming set during the Civil War have included this period -the most notable being the notorious silent epic “The Birth of a Nation,” and later “Gone with the Wind,” both decidedly of their time. As Ross learned, it was what Knight did after the war that made him more fascinating and cemented his enduring legacy. “Knight refused to stop fighting for civil rights, even after the war began to fade, and everybody assumed the slaves were free.”

During his research, Ross met with preeminent Civil War scholars, including historian Jim Kelly, a professor of American history at Jones County Junior College; Stephen Hahn, a professor of American History at the University of Pennsylvania; and David Blight, a professor of American History at Yale University. While in Jones County, he also visited actual battle and campsites depicted in the film. During his visits, Ross also met with several of Knight’s descendants who shared archival material and their personal family stories. At the time, Kelly was writing his PhD dissertation about Newt Knight with leading Civil War scholar John Stauffer, a Professor of English and American Studies, and African-American Studies, at Harvard Universityserving as his advisor.

Around the same time as his research visits to Jones County, Ross met and subsequently studied with, John Stauffer. Ross’s unofficial status turned official when he became a Harvard fellow in American studies under Stauffer, with full access to Harvard’s encyclopedic libraries and resources. “He became a mentor and provided me with guidance and tutelage–and a rather copious reading list,” Ross muses. Ross and Stauffer’s pupil/mentor relationship continued, leading to their collaboration on several historical projects, such as a lecture at the annual Principals of Private Schools event about how the South ultimately won the Civil War, a theme reflected in “Free State of Jones.”

While Ross was still researching and writing his screenplay he introduced John Staufferto noted Washington Post journalist Sally Jenkins. Inspired by Ross’ work, the two went on to collaborate on their 2009 book, The State of Jones, which would ultimately complete the historical record of Knight’s pro-Union views, his views about race, and how those views informed his actions after the war.

Matthew McConaughey portrays the heroic and defiant Newton “Newt” Knight.  With his southern roots, charisma, andphysical appearance, McConaughey is strikingly similar to Newt Knight himself. Although McConaughey says that nearly everything he needed to know about Knight was encapsulated in Ross’s script, he joined Ross on a research trip to Jones County “Gary and I took a trip to Newt’s hometown, and to his gravesite,” the actor recalls.

British film and stage actress Gugu Mbatha-Raw plays Rachel, a domestic slave who enlists herself into the Knight Company’s cause. The actress, who won several awards for both her starring role as the pop superstar Noni in the musical drama, Beyond the Lights[2], and in the title role of Belle as the mixed race daughter of a Royal Navy captain in 18th century England, recalls feelingamazed when she first read the script.

Free State of Jones marks French-born cinematographer Benoit Delhomme’s first collaboration with director Ross.  While reading Ross’ script, Delhomme admits he cried several times and quickly realized that what he was taught in French schools about the Civil War was inaccurate. “I was so shocked,” he offers.  “I immediately felt that I would be proud to help convey that important story.”

Delhomme is attracted to films shot on locations outdoors,as with Free State of Jones, shot primarily in the fields, rolling hillsides, and swamps of Louisiana.

For research and inspiration, Delhomme studied Matthew Brady’s famed Civil War photographs; but when it came to filming, “I wanted to shoot in a modern documentary style,” he asserts.  “For example, from the start I didn’t want to utilize artificial light in the day exteriors, and wanted to avoid crane moves.  I choose to work with a very limited color palette and color effects.  I have always been worried about how grass, or leaves, and all the green vegetation translates when captured by an HD camera.  I first tried to avoid putting too much green in the frame, but of course this quickly became a lost battle and strangely I started to love green, to embrace it.  I believe this color has a strong influence on the people who live in the midst of nature and in the swamps like Newt and his men do.”

Although Ross had never directed a film shot in a digital format before, Delhomme says that the director appreciated the textures the cinematographer achieved in HD on John Hillcoat’s Lawless and had no fear that the film could be done without using film stock.

The unpredictable Louisiana weather posed daily challenges for every member of the cast and crew, from the PA’s to the grips, costumers, production design, and camera departments.  “This was certainly the most difficult film I shot in my life,” Delhomme states.  “The weather factor was more than I had expected.”  He says keeping the continuity in the lighting on exterior day scenes shot over several days was a nerve-wracking experience.  He says his team tried to tame the clouds using gigantic sails and nets, but as they were in a constant sun/cloud alternation during takes it wasn’t easy.

Production designer Philip Messina was responsible for keeping visual consistency and historical accuracy at the film’s mosaic of locations during the four-month Louisiana shoot in the spring of 2015.  Throughout production, the art and costume design teams had to alternate between three different periods: the Civil War battles of 1863, the challenging post war Reconstruction Era, and the 1948 trial.

Principal photography on the 68-day shoot commenced March 2, 2015.  However, it was six months earlier that location manager Stephen LeBlanc and his team started scouting locations all over Louisiana to portray Mississippi during the Civil War.  With an abundance of period antebellum architecture, and exterior fields, woods, and swamps, New Orleans and its surrounding environs provided the filmmakers with the perfect backdrop to mount a Civil War drama.