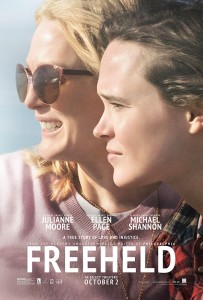 Cynthia Wade chose the title Freeheld because the word was rife with double meanings – seemingly referring not just to the name of New Jersey’s election county officials but also to the emotional stakes of the situation for Hester and Andree. The term originally referred, in Colonial times, to those who freely held real estate, but the word seemed equally applicable to navigating personal love and liberty.

The story of Laurel Hester first drew national headlines in 2005 — when the hard-nosed, 23-year veteran of the Ocean County police force made impassioned appeals for her partner to receive her pension as she confronted her impending death. The raw depths of what Hester and Stacie Andree went through in their campaign for equal rights came to the fore in an Oscar®-winning short, also named Freeheld, directed by Cynthia Wade.

Wade says that as soon as she heard about Hester’s quest for benefits, she felt driven to capture her story. With no funding and two young children at home, she began shooting the proceedings of the Ocean County freeholders while also becoming an inside witness to Hester and Andree’s poignant, but profound last days together.

As soon as Wade’s short was screened for audiences it started winning acclaim. By that time Academy Award® nominated producers Michael Shamberg and Stacey Sher (Pulp Fiction, Django Unchained, Garden State) were talking to Wade about expanding on her work with a feature drama that could reach a broader audience. Wade was thrilled by the idea. Simultaneously, actress and filmmaker Ellen Page and her producing partner, Kelly Bush Novak, found themselves magnetized by the story’s mix of social relevance and honest passion, and joined forces with Shamberg and Sher.

Freeheld’s diverse producing team now began an intensive search for a screenwriter who could weave all the story’s threads of love, police, politics, media and mortality into a gripping narrative. That search led to Ron Nyswaner, who brought his own insights.Nyswaner previously was nominated for an Academy Award® for his smart, humanist, close-up approach to the screenplay for the critically acclaimed Philadelphia, which starred Tom Hanks.

Seeing Wade’s documentary sealed the deal for Nyswaner. “Twenty minutes in, I was weeping uncontrollably in my living room,” he remembers. “I was just so moved by it, and I felt drawn to the mission to tell this story to a much bigger audience.” Nyswaner approached the story first and foremost as a bone-deep love story, one that touches on all the complications and delicate beauty of connecting with someone at a level that should need no validation from others.

To entwine the raw romance of Freeheld with its exploration of how civil rights are won through step-by-step changes in people’s hearts and minds, the filmmakers next recruited director Peter Sollett. Nyswaner was exhilarated to work with Sollett. Years before, he’d actually served as a script mentor to him at the Sundance Screenwriters Lab.

With Ellen Page attached to the story from the outset, the pressure was on to find a woman who could play Laurel Hester, who is facing a human being’s most vulnerable moments at the same time as she is taking on the daunting powers of government over her personal decisions. To embody both Hester’s resolve and her tenderness, the filmmakers approached one of the most lauded actors of our time: Julianne Moore.

Moore could not resist the challenge. “It’s a lovely, lovely story, and I really felt compelled to do it,” she says of her choice. Page was thrilled to join with Moore in bringing to life the most unexpected element of Hester’s life – her relationship with a woman 18 years her junior.