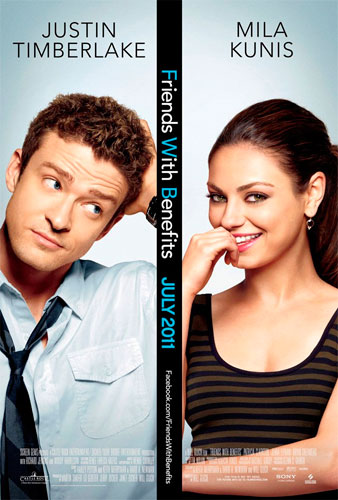 Friends With Benefits director Will Gluck previous film was Easy A, which features Emma Stone and Patricia Clarkson as mother and daughter.

Screen Gems was given clearance to move forward with the title Friends with Benefits; Paramount Pictures dropped its original protest against the film after their director, Ivan Reitman, re-titled his film No Strings Attached.  Complicating matters is the fact that NBC is planning a Friends With Benefits sitcom. Screen Gems stated that due to its production schedule, they don’t expect an issue to arise.

Gluck stated that the concept of the story began with the idea that he wanted to work with Kunis and Justin Timberlake. “There were a couple of actors I wanted to work with, so I adapted the original script and rewrote it for Justin Timberlake and Mila Kunis. I wanted to do more of an adult movie about sex, too, and about relationships.”  He compared the story to a classic Hepburn and Tracy production. “It’s as if they were making a movie in 2010. Having seen all the old movies, the characters know about the movies, too. I also got a great cast to support them.

It’s not just old films, but old stories. In life, everyone talks about old storylines and movies; “I know how this is going to end. This is going to end badly.” But in movies, people are completely dense. They think they’re the first boy to meet the first girl and wonder what’s going to happen. So I tried to imbue our characters with a sense of history; “This is what happens in this situation; let’s see how we deal with it.” I think once you let the audience in on the secret that these characters know they’re not the first persons in life going through this, there’s a sigh of relief as opposed to, “Come on!”

Justin Timberlake added that he and Gluck held authorship of humor and tone on the movie. Stated Justin Timberlake: “As a viewer, I don’t want to walk into a movie called ‘Friends with Benefits’ and see the PG-13 version. For me, you can’t have a movie like that without embracing what the title is.”