April, 1945.  As the Allies make their final push in the European Theatre, a battle-hardened army sergeant named Wardaddy (Brad Pitt) commands a Sherman tank and her five-man crew on a deadly mission behind enemy lines. Outnumbered and outgunned, and with a rookie soldier thrust into their platoon, Wardaddy and his men ­­­­face overwhelming odds in their heroic attempts to strike at the heart of Nazi Germany. 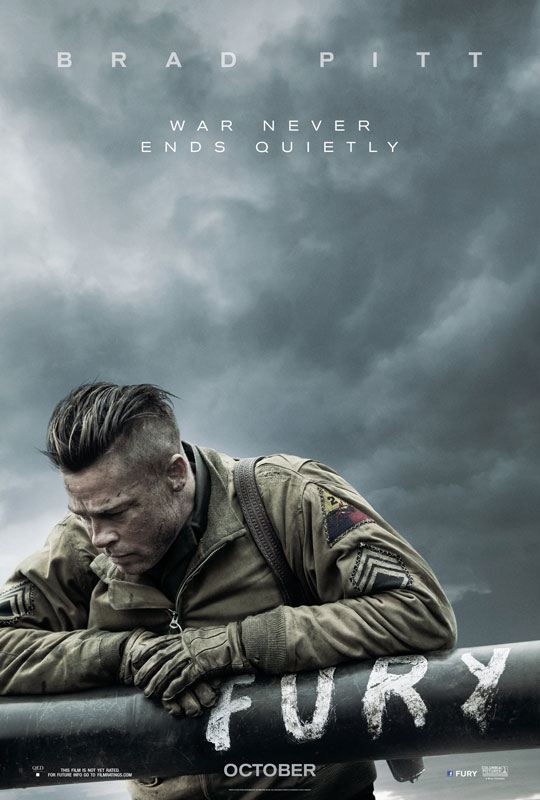 Kevin Vance and David Rae were the military advisors primarily responsible for working with the actors to make them into credible tankers. Among their other duties, Vance and Rae created a bootcamp for the five lead actors.

Leading the men of the Fury, written and directed by David Ayer, is Don Collier – better known by his war name, Wardaddy. The role is played by Brad Pitt. “Wardaddy is representative of the backbone of the army – sergeants and NCOs really hold the army together,” Ayer says.

Shia LaBeouf takes on the role of Boyd Swan. “He’s the gunner and basically the second-in-command of the Fury,” says the actor. LaBeouf was also inspired by working with David Ayer. “David has a wild history of his own, and he shares it with you and he listens. He’s our Patton – he’s kind of crazy, which is perfect,” he says.

After collaborating with actor Michael Peña on the film End of Watch, Ayer created the role of the tank’s driver, Trini Garcia, especially for Peña. “I believe around 350,000 Mexican-Americans served in World War II, many of them as drivers in the Armored Corps,” Ayer notes.

Fury was shot over twelve weeks in the fields of Oxfordshire and at Bovingdon Airfield in Hertfordshire. According to producer John Lesher, a number of practical conveniences brought the production to England. “First, there’s an amazing crew base, so that was a good place to start,” he says. “But there’s also an amazing amount of assets in England – tanks, armored vehicles, both German and American. Finally, the light in England – that beautiful northern light – and the weather was a good match for Germany. For all of these reasons, England became the ideal place.”

The only location which had limited mud was the German town set that Menzies built on a runway at Bovingdon Airfield in Hertfordshire. Menzies studied of German towns to incorporate appropriate architectural details – shutters, wood and plasterwork – into his build.

Director of Photography Roman Vasyanov, who previously collaborated with writer-director David Ayer on End of Watch, notes that this film took a very different approach to the photography. Where End of Watch was inspired by documentary-style filmmaking, Fury would be much more classical in its methods. The entire movie was shot on film and not digitally.

Production Designer Andrew Menzies was charged with realizing Ayer’s vision for the authentic look of the film. “I didn’t feel this movie was about design; It was about reproducing history,” says Menzies.