G.I. Joe: Retaliation is an  science fiction-action film directed by Jon Chu, based on Hasbro’s G.I. Joe toy, comic and media franchises. It is a sequel to 2009’s G.I. Joe: The Rise of Cobra. The film was written by Zombieland writers, Rhett Reese and Paul Wernick. G.I. Joe: Retaliation features an ensemble cast, with Dwayne Johnson, Bruce Willis along with Channing Tatum, Arnold Vosloo, Ray Park, Jonathan Pryce and Lee Byung-hun reprising their roles from the first film. 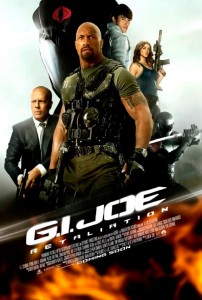 The film will feature the G.I. Joe Team coming into a conflict with Zartan, Storm Shadow and Firefly all serving under the newly released Cobra Commander.

In January 2010, Rhett Reese and Paul Wernick, the writers of Zombieland, were hired to write the script for the sequel. The movie was originally thought to be titled G.I. Joe: Cobra Strikes, which was later denied by Reese. Stephen Sommers was originally going to return as director of the sequel, but Paramount Pictures announced in February 2011 that Jon Chu will direct the sequel. In July 2011, the sequel’s name was revealed to be G.I. Joe: Retaliation.

In January 2011, it was confirmed that Lee Byung-hun will reprise his role as Storm Shadow in the sequel. Channing Tatum and Ray Park are also returning to the film as Duke and Snake Eyes, respectively. Rachel Nichols, the actress who played Scarlett in the first film, said that most cast members will not be returning, except for the three aforementioned actors. Joseph Gordon-Levitt also confirmed that he will not be returning as Cobra Commander in the sequel.

In June 2011, Stephen Martines was cast as Cross-Country, Dwayne Johnson was cast as Roadblock, D.J. Cotrona and rapper RZA were cast as Flint and Blind Master respectively, while Elodie Yung was in talks for the role of Jinx. In July 2011, Adrianne Palicki was confirmed for the lead female role of Lady Jaye, and Ray Stevenson was confirmed to portray the villain Firefly. Arnold Vosloo also confirmed that he would reprise his role of Zartan, and Joseph Mazzello was confirmed to play Mouse. In August 2011, it was confirmed that Bruce Willis was cast to star in the film as the original G.I. Joe.

Filming began in August 2011 in Louisiana. In September, a casting call sheet leaked to the Internet revealed that Cobra Commander would appear in the sequel, though it was unknown who will play the character. Ray Park also revealed that Snake Eyes’ pet wolf, Timber, would be appearing in the sequel.

On November 22, 2011, a crew member died in an accident at a New Orleans warehouse that was serving as a sound stage for the production. The incident happened while crew members were changing out a set.

On December 12, 2011, the premiere trailer for the film was released on YouTube. The trailer itself features a remix of the White Stripes’ song Seven Nation Army by The Glitch Mob.