Get A Job is a multi-generational comedy about four recent college graduates who discover that their lofty expectations and the realities of adulthood are two very different things.  Miles Teller plays Will Davis, who struggles through a series of increasingly odd jobs in search of his professional calling. Anna Kendrick plays Jillian Stewart, Will’s type-A girlfriend, who lives her life according to the strictest of plans.  Bryan Cranston plays Roger Davis, Will’s father, who surprisingly finds himself joining his son in the hunt for a new job. 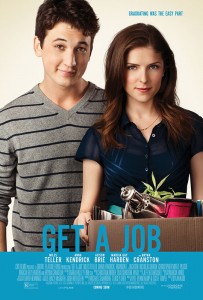 “The worst job I ever had was in college,” reveals producer Michael Shamberg. “My uncle owned a paper box factory. They would take huge stacks of cardboard and score them. Then you had to take a rubber mallet and knock the edges off, all day long. There was this big guy there, who’s like a body builder. He would just look at me and laugh. That was the toughest job I’ve ever had.”

When the script for Get A Job arrived on the desks of producers Michael Shamberg and Stacey Sher, they immediately saw its potential.  The story dealt with the trials and tribulations of getting a job, something that young and old people can relate to. After optioning the project, they turned it back over to the writers, Kyle Pennekamp and Scott Turpel, who fine-tuned it. Shortly thereafter, the filmmakers teamed up with director Dylan Kidd, who had the ability to add the emotional depth to the movie they were looking for.

“We wanted the movie to be naturalistic and appealing,” says Shamberg. “It is not an Indie film, and it is not a sitcom,” explains Shamberg.

“Audiences need more than one genre in a movie now,” explains director Dylan Kidd. “That’s what I liked about Get A Job. It’s almost a comedy tasting menu where we’re taking the best parts of a lot of different genres,” Kidd continues.

Before beginning to write the script, writers Scott Turpel and Kyle Pennekamp did a lot of research into the current job market. They looked at both ends of the spectrum. What it was like for both a middle-aged man finding himself suddenly unemployed, and for a young man graduating from college who expects to step into a top executive job, but finding out that it is not that easy.  “Today’s economic climate provides very fertile ground for comedy,” says Kidd.

The casting of Get A Job was a challenge because with several different relationships threading through the storyline, it was important to make the interaction work in each of them.  The four boys were a joy to work with,” says Kidd. “I was so thrilled when we were able to get Chris Mintz-Plasse for the movie. He is an iconic character.  Initially, I was worried about having four young actors on set, I thought they might be too competitive. It was actually a piece of cake because they bonded immediately. It was almost like seeing the Beatles coming together, they are the‘fab’ four.”

“Anna Kendrick was our first choice, for Jillian,” says producer Shamberg. “We produced Camp, which was her first film. We knew that she is a very fine comedic actress, who was also able to play a rather prissy uptight girl. The idea was that in the last act of the film she loosens up and I think that is why she wanted to do the role, to show that she is able to do a lot more than she has been doing recently.”

Finding the right actor to play the role of Roger Davis was critical to the casting. Producer Michael Shamberg had previously worked with Bryan Cranston on Contagion.[2] “He was our first choice for the role,” says Shamberg. “Cranston was the only actor that could play this partbecause he’s able to do the broad physical comedy then turn it on a dime and hit a dramatic note that actually moves you.”

The decision to shoot in Los Angeles was the most significant aspect of the look of the film. Director Dylan Kidd had recently moved there from New York. Production designer Marcia Hinds loved the way he looked at the city from a new perspective. We take everything for granted, but he would look at a place we see every day and think it was incredible.

“I adore Los Angeles,” says Kidd passionately.  “I moved here with my family a couple of years ago. I’d been in New York for more than 20 years, and I literally couldn’t find a shot in New York that hadn’t been seen before. When we came to LA, I was really surprised at how much of the city hasn’t been photographed.”

The movie was shot all over the city as well as out in Pasadena. “We found some really great spots that capture the character of the city,” says Rothstein. Central to the story, the crash-pad location was a perfect example of how the filmmakers used the city to tell the story.

“We found this great place that has fabulous views of downtown Los Angeles,” explains production designer Marcia Hinds. “It allowed so much more to be told than just a room where four guys hang out, which we have seen so much before. The crash-pad is an introduction to the rest of their lives.” The design of the crash-pad represented the character of each of the four boys. “Even though it was a big open space,” explains Hinds. “Each of the guys has their own corner. It has more life than the majority of the sets and gives a sense of freedom. We used art and graffiti to express their personalities. It is a room that has evolved over the four years they have lived there together and the center of the room is dominated by a huge television.”