Reeling from a terrifying assault over the summer, 19-year-old Brad Land (Ben Schnetzer) starts college determined to get his life back to normal. His brother, Brett (Nick Jonas), is already established on campus and with a fraternity that allures Brad with its promise of protection, popularity, and life-long friendships. Brad is desperate to belong but as he sets out to join the fraternity his brother exhibits reservations, a sentiment that threatens to divide them. As the pledging ritual moves into hell week, a rite that promises to usher these unproven boys into manhood, the stakes violently increase with a series of torturous and humiliating events. 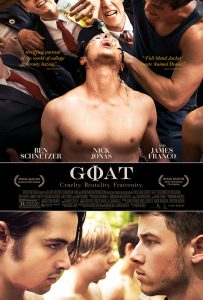 The film was shot primarily at Xavier University, The University of Cincinnati, the city of Newtown, North Avondale, and Clifton.

When Andrew Neel premiered King Kelly at SXSW in 2012, he was greeted with acclaim for his controversial portrait of a debauched teen webcam star who gets embroiled in a drug deal that goes horribly wrong. Christine Vachon and David Hinojosa at indie powerhouse Killer Films in New York saw King Kelly and championed the film. Killer and SeeThink (Neel’s company) began discussing Neel’s next film. Convinced that Brad Land’s memoir GOAT would make a fantastic movie Vachon had been doggedly holding on to the property for over a decade, in concert with James Franco’s company Rabbit Bandini.

Director Andrew Neel decided to come on board, revising the script with co-writer Mike Roberts. Neel had become deeply drawn to the material. “I realized the film could be part horror movie and part exposé,” Neel explained. “It was interesting how the whole central section of the film – the hazing section – basically turned into a horror film.” Neel, who has made a number of feature documentaries, was also intrigued by the more journalistic angle of the material. “There really haven’t been many narrative features made about hazing,” he pointed out.

For the process of casting those aforementioned guys, Neel worked with Susan Shopmaker, whom he’d previously worked with on King Kelly, to build out a compelling ensemble cast of the tortured masculine energies within the frat. Cementing the cast as Brad and his older brother Brett were Ben Schnetzer and Nick Jonas, respectively.

For Schnetzer, the part of Brad held enormous appeal. “Brad’s kind of like a raw nerve throughout the story,” Schnetzer explained. “I think any man, to one degree or another, can understand the struggle to define masculinity and what that means to him to identify as being a man. The script explored all these insecurities that I think a lot of guys feel, that I know I’ve certainly felt, but in a heightened and distilled manner.”

For Nick Jonas, much of the appeal of the script was the nuance it provided of Brad and Brett’s relationship. “The thing that came to mind to me when I first read the script was this compelling relationship between these two brothers. At its core, it’s a story about two brothers and their strength and support of each other and the journey that they go on. I knew that it was something that I wanted to be a part of from the minute I read it.”

The adulation for one’s frat is explored in great detail in the film, highlighted in one sequence in which a much older former member of the frat (played by James Franco[2], also a producer on the film) returns to campus and ends up partying excessively, keeping up with the frat brothers despite the fact that he has a wife and child at home. Neel noted that it’s the only point in the entire midsection of the film in which an adult is present.

In order to create the graphic sense of detail and verisimilitude in the sequences, Neel relied upon everything at his disposal, including not only Land’s memoir but Neel’s own personal experiences. “I went to boarding school, so I know what hazing is like. Now I never got hazed like what happens in the film, but I did experience hazing. And sometimes it was terrifying. Like they’d bring you in a room, and you just wanted to know what they were going to do to you. Now sometimes they just made you get fucked up. But other times they’d beat on you a little bit. My boarding school was pretty progressive, but there were bad things that happened there too. When the lights went off at 11:30, you had to fight to survive. It was 45 boys going through puberty, and it was intense.”