From the tour de force thriller that became a bestselling must-read comes David Fincher’s screen version of Gone Girl, a wild ride through our modern media culture and down into the deep, dark fault lines of an American marriage – in all its unreliable promises, inescapable deceits and pitch-black comedy. 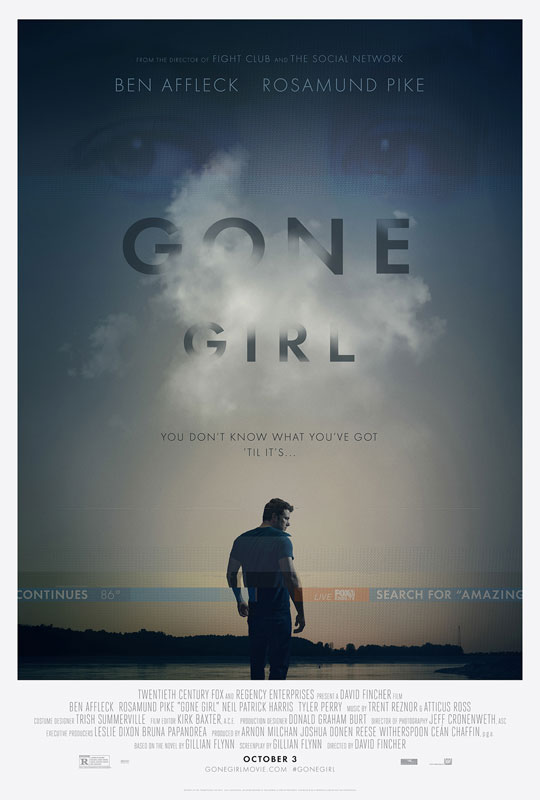 Affleck recalls having an early conversation with Fincher that set the ground rules. “He said, this can’t be a vain performance, you have to fully commit to showing the soft belly of this guy,” he remembers.

Upon its 2012 publication, Gillian Flynn’s novel Gone Girl became that rare entity: a massively popular, nail-biting summer bestseller that was also the talk of the literary world.

Taking the alternately guarded and exposed role of Nick Dunne is Ben Affleck. Says Fincher of casting him: “Putting a cast together is like putting a basketball team together and Nick was the point guard. He has to feed the narrative. It’s a ‘he said, she said’ in the book; but it’s ‘he experiences, she experiences’ in the movie. It’s more subjective. You’re not gifted with all these inner monologues in the movie. So you need an actor who is very deft to play this role. It’s 3-D chess, not Chinese checkers.”  Fincher also felt Affleck would have an affinity for a man who is sucked, rightly or wrongly, into the maelstrom of public fury.

Collaborating with Rosamund Pike in the role of Amy brought Affleck into an intense pas de deux unlike anything he’s done before. “There’s a kind of inscrutable, enigmatic quality to Rosamund that made her really right for this role,” Pike recalls being drawn instantly towards the book’s inky, x-ray view of the underside of marital bliss.

Among the possible suspects in Amy’s disappearance are former boyfriends, including Desi Collings, Amy’s long-suffering ex from prep school who, though breathtakingly wealthy, has continued to write her lovelorn letters. Taking the role is stage, screen and television star Neil Patrick Harris. Like so many, Harris was stunned by the novel.

As Nick comes under suspicion, he hires the most renowned expert in his type of situation – the so-called “patron saint of wife-killers”: defense lawyer Tanner Bolt. Taking a surprise turn as Bolt is actor, filmmaker and media mogul Tyler Perry in his first major dramatic feature role.  Perry was instantly drawn to the challenge of doing something completely unexpected.

Filming took place in Cape Girardeau, a quaint Missouri River town a little over 100 miles outside St. Louis, which stands in for Nick’s downturned hometown of Carthage.  One of the film’s literally darkest scenes takes place in an abandoned Missouri mall that has become a kind of mecca of the disenfranchised. Those sequences were shot in Los Angeles, using an abandoned Montgomery Ward store for the exteriors and the vast Hawthorne Mall for the interiors.

For the music that provides a surging undertow to Gone Girl, David Fincher returned again to work with Trent Reznor and Atticus Ross, who in addition to collaborating on Nine Inch Nails’ albums, together composed the scores for The Social Network and The Girl With The Dragon Tattoo.