In the Spring of 1945 – as the war in the Pacific entered its final, most deadly days, and U.S. forces in Okinawa encountered some of the most ferocious fighting ever witnessed – a single soldier stood out from the rest. This was Desmond T. Doss, a conscientious objector, who despite vowing to never kill, served boldly as an unarmed medic in the infantry … and went on to single-handedly save the lives of dozens of his fallen fellow soldiers under lethal fire without firing a single bullet. 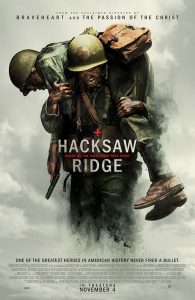 Producer Bill Mechanic had previously worked with director Mel Gibson on Braveheart and has watched as Gibson has continued to expand creatively.

In search of a screenwriter who could navigate all the historical, biographical and spiritual territory of Desmond Doss’s story, producers David Permut and Bill Mechanic hired Robert Schenkkan—who won the Pulitzer Prize for Drama for his Kentucky Cycle plays, an epic story of Western history and mythology told through the intersecting stories of three Kentucky families.

Schenkkan played with some of the early chronology to craft a tight structure. He carved secondary characters from amalgams of real people, and streamlined events from Doss’s early life. But when it came to Doss’s incredible feats on HACKSAW RIDGE, the screenplay hewed as close to the factual record as possible. That meant the film needed a director who could both expose the intimate inner life of the Doss family and also re-create the epic combat in Okinawa with a mesmerizing realism.

That specific combination is why Mechanic began doggedly pursuing Mel Gibson. With films that span from the classic, Gibson has become known for meshing big themes with atmospheric style that takes audiences into revealing worlds. “I first sent Mel the script for HACKSAW RIDGE in 2002, and in 2010, and then again in 2014,” recalls Mechanic. “His people had read it earlier, but up until the third time I sent it, Mel had been more interested in directing projects that he’d developed himself. In 2014, he read it overnight and by the morning he was essentially in.”

Says Gibson: “Desmond Doss abhorred violence, it was against his principles, his religious beliefs, but he wanted to serve his country in World War II as a medic. How does somebody go into the worst place on earth without a weapon? It was all the more compelling to me, because it was a true story, and I thought I could bring my visual language to it.”

“Once Gibson came aboard, we brought on Andrew Knight (The Water Diviner) to help build upon the incredible screenplay that Schenkkan had written several years earlier,” says Mechanic.

Bill Mechanic explains: “It was 14 years for me making the film, so I looked at many actors over that time to play Desmond Doss.” Mechanic knew that physicality was not the heart of the role, although it would take the lead actor into searing action. “Even if he was a Superman with a body built like The Rock, you still wouldn’t believe that a person still could do what Desmond did,” the producer muses. “It would take something else to believe in Desmond and that’s what Andrew Garfield brought.”

The Golden Globe® and Tony Award®-nominated actor known for his roles as Peter Parker in The Amazing Spiderman and Facebook co-founder Eduardo Saverin in The Social Network, immediately jumped at the role. “There wasn’t any hesitation when I read the script” says Garfield.

Despite the fact that Doss is now deceased, Garfield says he felt a heavy responsibility to honor his life and achievements. He spent three months prior to production devoted solely to exploring Doss and his surroundings in depth. “The preparation was extensive,” Garfield comments. “I visited Desmond’s hometown, the place where he retired, the home he grew up in and the home where he passed away. I walked the walks that he walked. I read all the books about him, absorbing as much as I possibly could. But that was just scratching the surface, really. One of the joys of doing a story like this is attempting to dive into someone else’s being, the time in which they were alive, which is endlessly fascinating. You get to be an historian and a researcher.”

Garfield was equally exhilarated by the working rapport with Gibson. “Working with Mel as a director has been a real highlight of my time being an actor so far,” he says.

Mel Gibson was excited to cast rising Australian actress Teresa Palmer in the role of Dorothea Schutte, Desmond Doss wife. Palmer felt an immediate connection to Dorothy. She explains: “I wanted to play Dorothy because she’s such a strong woman who knows what she wants yet she also has a tenderness and complexity to her. My grandmother and my grandfather both served in World War II — my grandfather was a fireman and my grandmother sent Morse code. I can remember them telling me stories about their romance during that time, and the script felt reminiscent of those tales that I grew up listening to.”

Casting Doss’s parents was a vital link for Mel Gibson. The director says: “If you’re making a film about someone who really existed, you have to investigate those he loved, those who loved him, and the forces exerted on him by the people around him.” Australian actor Hugo Weaving, known for films ranging from The Matrix to Captain America, plays Tom Doss with insight and compassion.

Weaving did his own research as well. “I wanted to understand more about post-traumatic stress, and what it was like to be on the front lines in World War I,” he says. “It’s something I’ve been interested in for a long time – the effects of that particular war – so I did a lot of research, and also really tried to use my imagination to understand what it was like.”

With a husband in turmoil and two sons who desperately need her direction, it falls to Desmond’s mother, Bertha. Academy Award® nominee Rachel Griffiths, recently seen in Saving Mr. Banks, immersed herself in the challenging role of a woman who was both traditional and a powerful influence. Griffiths explored the Seventh Day Adventist church to which Bertha belongs and its philosophies, which are the underpinning for Desmond’s ethics. “It was really important to me that faith is not a didactic character in this film. It’s an underlying force that informs people’s moral choices in the screenplay, and that feels very authentic,” says Griffiths.

Production took place entirely in Australia, which was able both to simulate 1930s Virginia and the scrubby, harsh terrain of Hacksaw Ridge itself. Gibson says working there brought many advantages. “The level of the performers and the crew are excellent, as good or better than anywhere in the world. It’s a great place to shoot and I think it will remain so.”

The crew worked with closely with a bevy of experts, including a WWII battleship expert, who sourced reference footage, mapped out how the ships would have attacked, the size of the weaponry they deployed and the size of the explosions themselves. Special effects supervisor Chris Godfrey says: “There are a lot of wonderful experts who know the fine minutiae of World War II and we relied on that knowledge.”