Happy Feet Two (also known as Happy Feet Two in 3D) is a  computer-animated film directed and produced by George Miller, who co-directed the original film Happy Feet. Animal Logic Films in Santa Monica, California, and Dr. D Studios in Sydney, Australia are producing the film which is currently set to premier in North American theaters on November 16th 2011 and November 25th 2011 for United Kingdom in RealD 3D and IMAX 3D. 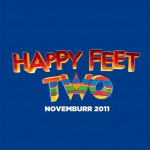 Elijah Wood and Robin Williams are set to repeat their previous performances as Mumble, Ramon, and Lovelace and Matt Damon as Bill the Krill. Also set to work on the film are Carlos Alazraqui, Johnny A. Sanchez, Lombardo Boyar and Jeffrey Garcia as Nestor, Lombardo, Raul, and Rinaldo. No other actors have been confirmed as repeating their earlier performances.

Brittany Murphy, who originally voiced Mumble’s love interest Gloria, was set to reprise her role and begin recording sometime in 2010, but her death on December 20, 2009 has rendered that impossible. Pink appears to be the late Murphy’s replacement and Miller has confirmed that she will contribute a song, and Brad Pitt and Matt Damon will voice the tiny krill. Hank Azaria has also signed on to play a new character. Elizabeth Daily, who played young Mumble in the previous film, will play Mumble’s choreo-phobic son Erik and Sofía Vergara will also appear in the film as a new character.

The music of Happy Feet Two, a Warner Bros. Pricture  movie, is delivered by Pink and John Powell.

To coincide with the upcoming Happy Feet Two film Warner Bros. Interactive has announced a videogame that sees gamers dance to save the penguins from extinction. Players must use their dance moves to recruit members with unique abilities, stun and defeat opponents and even manipulate the environment around them.  This toe-tapping musical adventure, scored by the three time Grammy Award winning band Ozomatli, will get players into the penguin groove fall 2011 on Xbox 360, Playstation3, Wii, Nintendo DS and Nintendo 3DS.