Strap in. Hardcore Henry is one of the most unflinchingly original wild:rides to hit the big screen in a long time: You experience the entire film through the main character Henry. When the film begins, you remember nothing. Mainly because you’ve just been brought back from the dead by your wife (Haley Bennett). She tells you that your name is Henry. Five minutes later, you are being shot at, your wife has been kidnapped, and you should probably go get her back. Who’s got her? His name’s Akan (Danila Kozlovsky); he’s a powerful warlord with an army of mercenaries, and a plan for world domination. 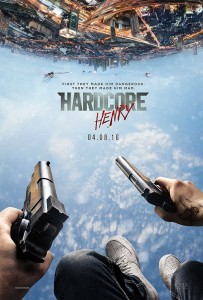 Fortunately, the specific shooting style writer/director Ilya Naishuller envisioned won the support of GoPro from the start.
“Shortly after ‘Bad Motherf*cker’ debuted on YouTube and started to explode on the web, Gregg DiLeo, who was head of Sports Marketing for GoPro, reached out to Ilya to congratulate him. So when we decided to shoot the film with GoPro cameras, I contacted Gregg, told him about our film and asked him if he could help us. David Newman from GoPro, who is a Senior Director of Engineering agreed to help up with all things technical and did. Gregg DiLeo would find a way to Fedex cameras to Moscow on day’s notice, and Dave would frequently answer emails about tech questions in the middle of the night. We literally couldn’t have done it without them,” Producer Inga Smith says.

“Hardcore Henry” began with Russian:born filmmaker Ilya Naishuller’s groundbreaking, irreverent video “Bad Motherf*cker.” The video, done as part of his “other” job as front man for the punk band Biting Elbows, was an operatic, uncompromising story told entirely from the point of view of the protagonist.  Fiercely mesmerizing, it became a viral sensation attracting over 120 million views around the world.

Producer/director Timur Bekmambetov was one of those fans. He contacted Naishuller via Facebook message and encouraged him to expand his vision into a feature length film, and the result was “Hardcore Henry,” an action:packed, immersive experience told completely from the point:of:view of a cyborg named Henry.

“I couldn’t stop watching ‘Bad Motherf*cker.’ I admired Ilya’s daring, creative spirit,” says Bekmambetov. “There are three major factors that draw me to a project : originality and boldness and an interesting concept. That video was truly unique and unusual. Something that looks like pure insanity turns out to be a well thought out and rational project. Ilya’s process in achieving this effect is one of his most valuable assets,” Bekmambetov says.

Shot almost entirely on GoPro cameras with custom engineered rigs, “Hardcore Henry” completely abandons, even eviscerates, traditional filmmaking and replaces it with a raw and immediate experience, allowing the audience to become one with the protagonist, so viewers go on a very personal and breathtaking journey with Henry.

“The second night after ‘Bad Motherf*cker’ had become such a hit, I got a message on FB from Timur. He’s a huge deal to us in Russia; he’s a cinematic hero. We met over Skype, he said congratulations and asked if I might be interested in expanding it into a feature film?  To be honest, I was hesitant at first because I wasn’t sure it could be done well enough to transcend the gimmick. But Timur asked, ‘Would you not want to see a great POV action film in a cinema?’ I said yes, and he simply answered ‘Well, go make it then,‘ Naishuller recounts.

Producer Inga Smith was an early Naishuller fan, introduced to his earlier videos by Russian producer Ekaterina Kononenko, whom Smith met during Cannes a year before  Hardcore Henry was born.  “It was clear how undeniably talented Ilya was. We met in New York to discuss a film Ilya wanted to direct and I signed on as a producer. We had just received the first draft of that very different film when the video for ‘Bad Motherf*cker’ exploded on the web and Ilya began to receive a lot of attention from Hollywood.” Smith recalls.

“I went home to write the script and within a few days of working on it, I called Timur and pitched him the idea of getting a star for the yet unnamed sidekick character. Timur asked  me, who I was thinking of, and I immediately said Sharlto Copley. Timur arranged for Sharlto and I to get on a Skype call and I described to him the style of the film, the basic story outline and the part of the guide and counselor that I wanted him to play.  Sharlto said that he was intrigued by the concept, wasn’t afraid of participating in something so experimental, and that as long as he liked the final script and his character, he’d do it. I then had a very nervous week of creating the Jimmy character. I had to have Sharlto in this film so I had to come up with something truly special that he could not say no to. And I figured that no actor could possibly avoid the magnetic lure of having to play multiple characters in the same film. Hence, the idea!  of the many Jimmies was born.”

Social media proved to be a generous benefactor to “Hardcore Henry.” Not only did it lead Bekmambetov to Naishuller, it allowed them to return to the fans that originally championed the video.  Through a robust web:based outreach, those same supporters provided the funds needed to finish the independent movie properly.  The Indiegogo campaign seemed an organic extension for  “Hardcore Henry.”

The movie was shot on location in Moscow and plays out like a punk rock travel guide to the city. For Haley Bennett, Moscow was one of the film’s appeals and she took full advantage of the opportunity to explore Russia.

While Smith certainly appreciates Moscow’s many charms, like any city, it isn’t always easy to shoot there, especially the kind of adventurous set pieces the movie required. And then there were elements beyond their control to consider – local traditions that potentially threaten filming and the infamous Russian winter, which made a premature and an unwelcome appearance.  “We had a number of uncontrollable surprises that resulted in setbacks for the shoot. The main one was the weather. It started snowing in mid:September. For the big finale, we were planning on shooting on an actual rooftop in Moscow, but with early snow that became impossible. So, we had to move to plan B : build a set on a stage and do it there. The same went for the bike chase scene : we had to shoot it halfway through post when the next summer arrived. Sharlto had a narrow window of availability and we jumped at the opportunity to work with him, but that gave us a start date that couldn’t move and the weather didn’t cooperate.”