Based on the #1 New York Times best-selling book of the same name, Heaven Is For Real brings to the screen the true story that has inspired millions across the globe – that of a little boy’s extraordinary, life-changing experience, and his father’s search for the courage and conviction to share his son’s discovery with the world. 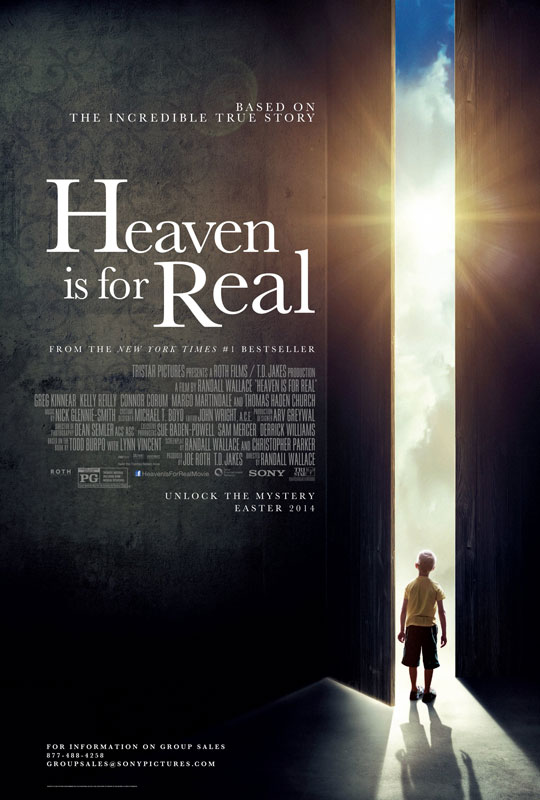 Locations were also kept authentic – for example, the fire hall, fire trucks and other fire-fighting equipment in the film all belong to the firefighters of Rosser, Manitoba, who served as extras in the film along with several members of the Imperial, Nebraska volunteer fire department.

Right from the start, Randall Wallace and the filmmakers knew if they were going to bring Heaven Is For Real to contemporary audiences they would need a crack cast to truly bring the Burpo family and their unusual predicament to life. Todd Burpo would be especially challenging to cast, as a devoted but down-to-earth family man sent reeling by a riveting mystery when his son begins to talk of his trip to heaven. Wallace says that the first name that came to mind was Greg Kinnear. But for all his comic chops and affable charm, Wallace felt there was an underlying genuineness to Kinnear that was key to the role. “I had known Greg from working with him on We Were Soldiers,” the director explains.

To play Sonja Burpo, the vivacious mother and wife who is swept up into something extraordinary when her son says he was taken on a journey through heaven, the filmmakers turned to Kelly Reilly, the British actress known for her roles as Mary Morstan in Sherlock Holmes and Sherlock Holmes: A Game of Shadows. Randall Wallace was instantly taken with Reilly upon their first meeting. “She has an earthiness as well as a delicacy,” he says. “I knew within 10 seconds that Kelly had to play Sonja.”

The crux challenge of casting Heaven Is For Real was the search for a very special child who could play Colton Burpo with the natural, easy-going innocence that made his story so persuasive. “Finding Colton was a huge challenge because the movie could not succeed if Colton seemed artificial. If you believed that he was just reciting lines, you would never believe any of what he was saying,” Wallace explains.

Casting director Sheila Jaffe launched a nationwide search – but it wasn’t until the very end that they found their Colton. “We saw a lot of tapes and finally got down to eight boys. Seven boys were very similar to one another but one boy was different,” remembers Joe Roth. That one boy was then five year-old Cleveland native Connor Corum.

Shooting in Winnipeg, Canada, Wallace and Grewal utilized abundant fields of wheat, radiant sunflowers and the crisp-blue, boundless sky as the foundation for the film’s visual architecture.