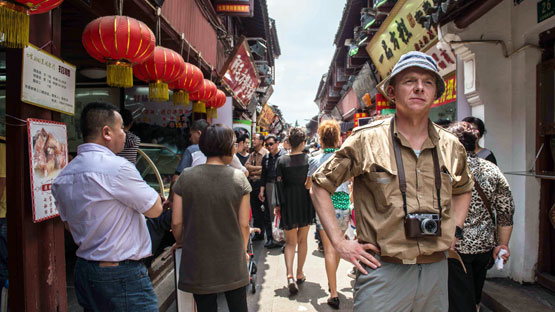 Hector (Simon Pegg) is a quirky psychiatrist who has become increasingly tired of his humdrum life. As he tells his girlfriend, Clara (Rosamund Pike), he feels like a fraud: he hasn’t really tasted life, and yet he’s offering advice to patients who are just not getting any happier. So Hector decides to break out of his deluded and routine driven life. 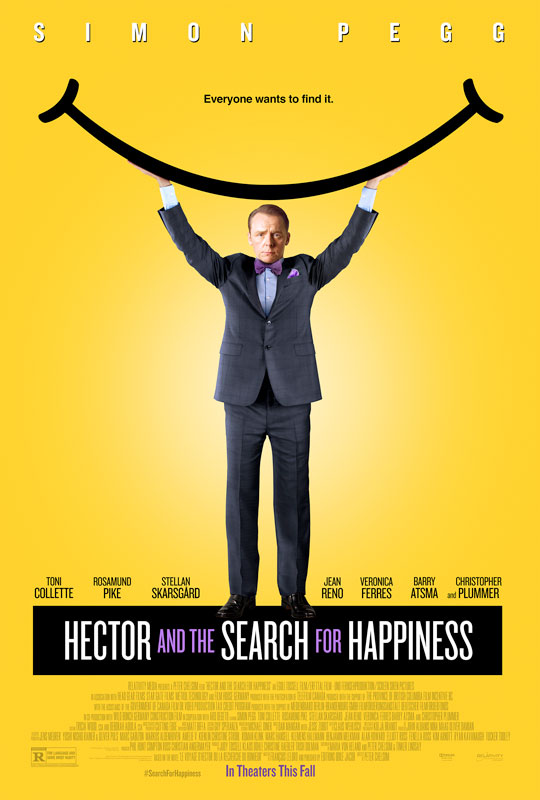 Simon Pegg heads an all-star international cast in Hector and the Search for Happiness, a German-Canadian coproduction directed by Peter Chelsom and filmed on four continents.

Once upon a time… when producer Judy Tossell first read the German translation of François Lelord’s novel, Hector and the Search for Happiness (originally written in French as Le Voyage d’Hector ou La Recherche du Bonheur,) she was surprised by how profoundly the book resonated with her. After doing a little research on the book, she was surprised to learn that the author himself was a psychiatrist who had originally intended to write a textbook. Tossell optioned the rights to the novel, which went on to become a bestseller in Germany.

Tossell, based in Germany, had previously worked with Canadian producers Christine Haebler and Trish Dolman, and the three had become friends. Tossell sent them an early draft.  “We realized the book wasn’t that easy to adapt. It’s very visual and needed a filmmaker with a strong idea of how the film was going to look and a unique philosophy on the subject of happiness. I’d been a huge fan of Peter Chelsom’s, ever since Funny Bones, and once he read the book, he had a fabulous take on how to make the movie.” Chelsom tackled the project with longtime collaborator and co-writer, Tinker Lindsay.

To compliment Hector on his epic search for happiness is a group of distinctive characters, each with their own take on what it means to be happy. “There is a whole cast of characters he meets on his way,” says Tossell. “Each of them only had a couple of days of shooting, but they had to be good. Our ambition was to have an amazing cast.” Mission accomplished: Pegg is joined by Toni Collette, Rosamund Pike, Jean Reno, Stellan Skarsgård and the legendary Christopher Plummer.

An epic international journey, Hector and the Search for Happiness was shot on four continents (North America, Europe, Asia and Africa). “Sometimes it felt as if the film was more like ‘Around the World with Simon Pegg’. And that’s a good thing!” says Chelsom.

“An important component was not only casting for actors, but casting the crew,” says Haebler. “We were taking 22 people around the world and we were going to be with each other, night and day, for basically four months. We didn’t have a lot of money to throw at problems, we didn’t have a luxurious schedule, and we needed to understand one another and we needed easy personalities.” adds Chelsom.

Filming for the project began in March 2013 in Vancouver, British Columbia, where production shot for 16 days. Simon Pegg, Christopher Plummer, Toni Collette, Rosamund Pike, Jean Reno and Veronica Ferres all filmed scenes while in Vancouver. Dr. Coreman’s lab was built at Riverview Hospital, and his lecture hall was filmed at the University of British Columbia.

In Shanghai, six areas of the Pudong Airport were used as filming locations for scenes taking place at London’s Heathrow, LAX and Shanghai airports. During the two months of prep, the Chinese production manager had visited the airport some 25 times to negotiate filming access, but that didn’t necessarily guarantee shooting would go off without a hitch.