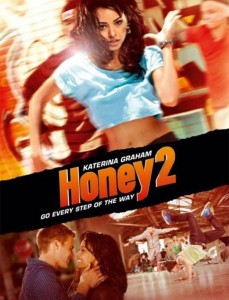 In Honey 2, recently released from juvenile detention, talented dancer Maria Ramirez finds an outlet for her passion with a new dance crew.

The legacy of legendary dancer and choreographer Honey Daniels lives on in spirited 17-year-old Maria Ramirez (Katerina Graham). After a brush with the law, Maria has returned to her gritty Bronx roots to rebuild her life with nothing but a talent for street dance and a burning ambition to prove herself. She finds refuge in the place that made her feel most alive as a kid at the rec center where Honey’s exuberant classes first ignited her passion for dance.

Keeping on a straight and narrow means living with Honey’s mom Connie (Lonette Mckee) and holding down a job just to make ends meet. But a rare night out at a local dance club gives her an opportunity to let loose with a joy and energy she had almost forgotten. Maria’s killer moves catch the eye of Brandon (Randy Wayne), a rec center volunteer, who invites her to help him transform a group of gifted but indisciplined dancers called the HD’s.

Maria’s skills also attract the attention of her old boyfriend Luis (Christopher ‘War’ Martinez), the charismatic leader of the award winning 718 dance crew, who hopes to lure her back into the street world she is trying to escape. Seeing a chance at creating a new and meaningful life, Maria pours her heart and soul into dance and begins training the HDs to compete on the television dance competition “Dance or Die” which means going up against the 718 and Luis. Like Honey before her, Maria rediscovers the thrill of dancing as she finds out who she truly is and where she belongs.