New York City is full of fun seekers seeking the right match, be it a love connection, a hook-up, or something in the middle. And somewhere between the late night date nights, teasing texts and one-night stands, what these unmarried all have in common is the need to learn how to be single—and have a hell of a time—in a world filled with ever-evolving definitions of love. Sleeping around in the city that never sleeps has never been so much fun. 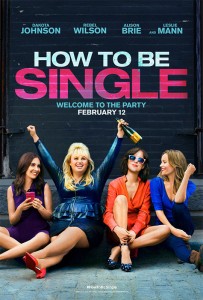 In How to Be Single, the exterior of Meg’s building was shot at the corner of Broadway and 77th Street in the midst of the busy Upper West Side neighborhood. There, Ditter and Rein shot a scene where Alice and Robin face the challenge of a brand new day in the Big Apple— after a very long night out.

The film’s director, Christian Ditter, states, “I wanted to make a really modern and fresh take on the comedy genre as it deals with partying, having fun, dating—a snapshot of what it really means to be single today. A lot of movies that deal with men and women and dating are about finding the right one, but this is not that; it’s about embracing the most fun and free time of life while you’re also finding your place in the world, finding friends, finding out what you want to do with your life.”

Happily, what’s scary in real life can make us laugh the hardest when it’s played out on film. Screenwriter/producer Dana Fox, a comedy veteran, offers, “Romantic comedies are always centered on the romance, but this is a comedy about the time in between the relationships, when you’re out there to have a good time in this crazy age of staring at your cell phone, having entire conversations in 140 characters or less and ‘swiping right’ to meet people.”

“How to Be Single” takes us along with Alice as she ventures into a new job, a new city—New York—a newly unattached life, and all that goes along with it. Dakota Johnson, who plays the fresh-faced Alice, says, “I loved how believable the story was—we’ve all been that person who is stumbling through, trying to figure things out.”

None more so than the aggressively spirited Robin, who makes it her mission to not only show the newcomer the ropes at work, but after business hours as well. Rebel Wilson took a no-holds-barred approach to her character. The production brought in Wilson’s close friend Aakomon Jones, who choreographed her in “Pitch Perfect,” to give Robin all the right moves for her entrance. “AJ choreographed a little dance for me and we did it about 50 times that day, just for that one opening shot. It was so much fun,” she adds.

If Robin is a new and somewhat unstabilizing force in Alice’s life, her sister, Meg, is her rock. The part is played by Leslie Mann, whom Ditter refers to as “comedy royalty, great fun and a total pleasure to watch.”

To pick up the tab—and more—the filmmakers from “How to Be Single” cast a host of hot comedians from film and TV fame to play the men ready to show the women a good time. Serial single Tom is a bartender with a tried-and-true formula for getting a girl out the door before dawn. “He’s got love ‘em and leave ‘em down to a system,” says Anders Holm, who plays the philandering flirt with a premeditated lack of amenities in his bachelor pad. Holm says that he and Ditter discussed at length how far to take Tom’s bad boy behavior. “We talked about whether he’s a nice bad guy or a bad nice guy, and decided that he’s really the worst kind of good guy.”

While Alice is on the lookout for someone new, she meets a single dad, David, who is attracted to her but hesitant to test the relationship waters again. Damon Wayans Jr. portrays the wary widower venturing back into the dating world.

“How to be Single” was filmed entirely in and around New York City. In the thriving metropolis of eight million people and countless possibilities, the shooting schedule was ambitious in its scope, covering approximately 45 locations in 47 days. “We were all over town,” says producer John Rickard. “In the Meatpacking District, on a Midtown rooftop, Wall Street, Fifth Avenue… And we captured it in a real way. Christian knew how special it was to shoot in New York, and he really got it all.”

While the city photographs beautifully, it’s nevertheless a challenging city for film production. Ditter notes, “It was the first time for me to shoot in New York, and I think I approached it a bit naïvely. Everywhere I looked, it looked like a movie, wherever I pointed my camera, it looked like a still from a film, so I thought, ‘This will be easy.’ Of course, it was not. There are tons of logistics involved and it’s a massive undertaking. Fortunately, we had one of the best crews in the entire world and they pulled it all off effortlessly.”

Uptown, Metropolitan Hospital on First Avenue at East 97th Street served as Meg’s workplace, while the East Side also provided locations for a shopping expedition at Giggle on Lexington Avenue, and for Alice and Robin’s adventures in beauty: Bloomingdale’s on Third Avenue, Drybar on East 76th Street, and MAC cosmetics on Fifth Avenue and 22nd Street.