Laney (Sarah Silverman) is an attractive, intelligent suburban wife and devoted mother of two adorable children. She has the perfect husband (Josh Charles), a pristine house and a shiny SUV for carting the children to their next activity. However, just beneath the façade lie depression and disillusionment that send her careening into a secret world of reckless compulsion. 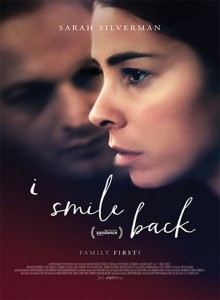 Finally, rejections from 80 publishers later, writer Amy Koppelman’s work found its way to Two Dollar Radio, an acclaimed independent press run by Eric Obenauf and Eliza Wood-­Obenauf. Koppelman claims that Eric gave her the most significant note on the work. He thought it was key that people understood that Laney is not disturbed because she’s cheating on her husband and family; she’s cheating because she’s disturbed.

“I spent a lot of time thinking about mental illness or personality disorders. That’s what interests me the most as a writer,” says I Smile Back author, Amy Koppelman, when she addresses where the character of Laney originated. This was the second novel for the writer, the first being A Mouthful of Air (2004).

A life for Laney beyond the pages of her novel never occurred to Amy Koppelman, until driving her car on the West Side highway one day with the radio on. She says, “I heard Sarah Silverman on The Howard Stern Show. She was talking about her autobiography, Bedwetter, and I can’t remember exactly what she said, but she was talking about the quality of loneliness. I don’t remember exactly what it was, but I remember thinking, ‘She would understand this book. I have to get this book to her.’”

Previously, on the “other coast,” screenwriter Paige Dylan (who had earlier collaborated with the author) had given a copy of the book to producer Richard Arlook, and both later attended a reading of I Smile Back by Koppelman at the iconic Los Angeles bookstore, Book Soup. The producer and author discovered they were both from the same small town in New Jersey and, according to Arlook, “We found that we had all of these connections, and we just bonded. And that was the beginning.”

What followed was Amy Koppelman and screenwriting partner Paige Dylan setting out to translate the interior‑dialogue-­laden novel into a screenplay, expressly with Sarah Silverman in mind as Laney, that wasn’t going to “suck.” They first wrote all of the book scenes out, “which was like a 200‑page script,”
quips Koppelman.

For her part, Paige had to be convinced of the main casting choice, however. She confesses, “It took me a while to warm up to the idea, honestly, because I love Sarah for her comedic genius, but I could not fully envision her doing this…until the first day she showed up, and she was incredible.”

So with the acceptance of the role by Silverman, and the band of producers eager to make the film, scouting for a director began. The filmmakers had seen Adam Salky’s 2009 film Dare (which had screened at the Sundance Film Festival), and took a meeting with the director, sending him away with the screenplay. It was what Salky did in preparation for their follow-­‐‑up meeting that helped him nab the job.

Filmmakers, cast and crew were also universal in their desire to be in on the experience watching Silverman inhabiting Laney. Brian Koppelman summarizes, “It turned out that Sarah was an incredible attraction—between Sarah and the material, this thing was a magnet for actors. They all wanted to come and do it. I mean, nobody said ‘no’ to us. Josh Charles, Thomas Sadoski, Mia Barron, Terry Kinney, Chris Sarandon—in every spot there is somebody special.”

Mike Harrop relishes the challenges of small budget filmmaking, versus larger, studio-­‐‑backed productions. He says, “One of the principal differences is the resources you have and the time you have—or don’t have. So we shot in 20 days, which is very quick. It means we shot about five minutes of the movie every day. And given that Sarah is in nearly every frame of the movie, it really presented a challenge for her to be able to deliver this very dark and personal performance in that amount of time.”

Production was lucky to have secured the services of Eric Lin as cinematographer—whose resume is filled with filming similarly sized productions. Lin worked with Salky to design a lot of the look of the film around the pragmatics: crew featured one grip and one gaffer; many of the practical locations were simply human living spaces, not designed to provide extra space for possible film crew needs.

First day of shooting I Smile Back was to be on location in Long Island, an hour’s drive for most, coming from the City. With a huge snowstorm scheduled to hit that day, filmmakers circled their wagons and looked for scenes they could shoot in NYC without travel. The only ones were scenes that involved Laney and Donny—one very taxing emotional scene that occurs near the end of the film, and one of their onscreen sexual encounter near the beginning of the story.

In the world of small film production, filming waits for no man…no matter how ill. The day Kinney was scheduled to shoot all of his scenes, he found himself suffering from a whopper of a stomach flu, high fever, throwing up, the works. And yet, per Brian Koppelman, “He showed up and just killed it. He didn’t try to call in sick, didn’t ask, ‘Can you cover for me?’, didn’t complain. He just showed up with the full empathy package on display and gave everything he had.”