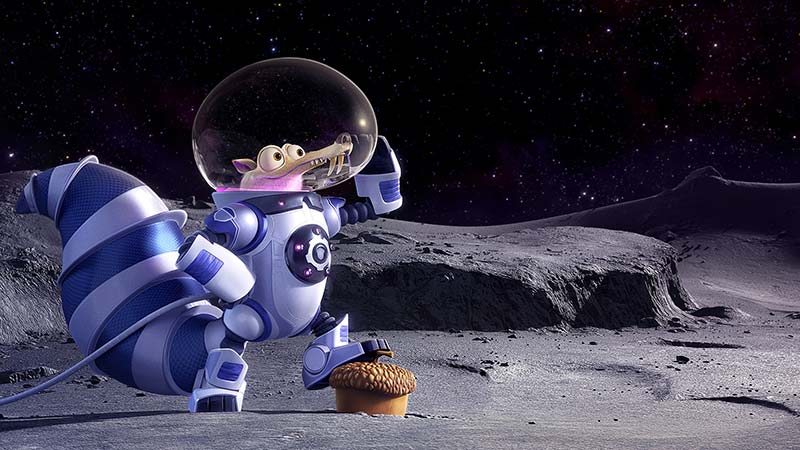 Scrat’s epic pursuit of the elusive acorn catapults him into the universe, where he accidentally sets off a series of cosmic events that transform and threaten the Ice Age world.  To save themselves, Sid, Manny, Diego and the rest of the herd must leave their home and embark on a quest full of comedy and adventure, as they travel to exotic new lands and encounter a host of colorful new characters. 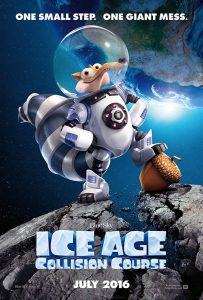 Tyson’s journey to ICE AGE: COLLISION COURSE began when a story artist on the film cut-and-pasted a photo of the scientist onto some story panels. Then, remembers co-director Galen Tan Chu, “Mike /Thurmeier/ and I looked at each and said, ‘Let’s make him a character in the movie.’”

The new film’s story is deeply rooted in the mythology of the original Ice Age.  Producer Lori Forte, who has been with the franchise since its inception, and whose ideas have sparked several of the films’ stories, explains:  “In the first film, there was a scene where the herd passes through a kind of ice ‘museum,’ where we see a prehistoric fish, a dinosaur, the evolution of Sid, and then a spacecraft or flying saucer. We always recognized that the spaceship was intriguing and knew there was some kind of mythology attached to it that we’d someday explore, but at that time we didn’t know exactly what it was,” she continues.   “So we decided the time was right to come back around to that piece of Ice Age, and sowed the seeds for COLLISION COURSE.”

Director Michael Thurmeier embraced the opportunity to find a unique environment—and catastrophes—for the cherished acorn-chaser.  The filmmakers’ new path for Scrat also presents fresh obstacles to overcome.  This time, he must deal with gravitational forces, other worldly technology, and the infinite mysteries of the cosmos.

John Leguizamo again brings his unique vocal stylings to the character, which the actor has truly grown to love.  “Sid is always honest in his reaction to things, no matter how disastrous that thing may be,” says Leguizamo. As Thurmeier points out, “If Manny is the emotional core of the Ice Age films, then Sid is the comic conscience. ”

To Manny, no one is good enough for Peaches, especially at a time when the world may be coming to an end.  Can Julian protect his daughter?  Manny’s doubtful he’s up to the task. Says Thurmeier, with a smile: “I’m a dad with two young girls, and when I look at Manny I see my future.  My girls are going to grow up and get married, and that’s obviously a fact of life.  Hopefully, I’ll learn from Manny’s mistakes.”

Ray Romano, who again voices Manny, the films’ anchor and emotional core, has a familial situation similar to Thurmeier’s.  “I have a daughter who’s around the same age as Peaches,” the famed comedian and actor explains.  “As a dad, it’s bittersweet.  You want your daughter to be happy and to find somebody special, and yet you think whoever she does find isn’t going to be good enough for her.” Long before Manny had to contend with a daughter getting hitched, Romano had developed an affinity with the character.  Given that Romano has been voicing Manny for 15 years, it comes as no surprise that he’s perfectly in sync with his cinematic alter ego.

Manny’s better half, Ellie, joins her hubby in dreading Peaches leaving home.  Queen Latifah reprises the voice role as Ellie.  Keke Palmer, who returns as Peaches, says the character is the same mammoth we know and love, even if she’s entering a new, exciting and daunting phase of her life.

Buck’s return to the Ice Age universe—he sat out the previous entry, Ice Age: Continental Drift— is a welcome one for the film’s director, who is among the character’s biggest fans.  “Buck was my favorite character in Dawn of the Dinosaurs,” says Thurmeier, “and I was really happy we were able to craft a story where we could bring Buck back from the Lost World.” Simon Pegg dons Buck’s eyepatch, figuratively of course, for his second turn as the dino-whisperer.

Famed astrophysicist and science-explainer extraordinaire Neil deGrasse Tyson voices the role of “Neil deBuck Weasel”—a figment of Buck’s imagination who,  along with fellow super-intelligent imagination figments “Pythagoras Buck” and “Robo-Buck,” helps the gang figure out how to possibly beat the asteroid.

Denis Leary returns as Diego, and Jennifer Lopez reprises her Continental Drift role as Shira.  The Dino-bird family patriarch is Gavin, voiced by Parks and Recreation’s Nick Offerman.  Wanda Sykes reprises the role of Granny, the character she created in Continental Drift and joining the Ice Age team to voice Brooke is singer / songwriter Jessie J, who unsurprisingly brings a melodic quality to her performance.

As Scrat is hurtled into the galaxy, “we create a new palette and visual style that goes beyond the ice,” says Thurmeier.  Geotopia may be the most striking example of the film’s new design and palette.  “It’s by far the biggest change from what we’ve done in the previous films,” says Knapp.  “In some ways it’s the culmination of things we’ve been exploring over the years, but with a very different look.  It allowed us to spread our wings beyond the usual color scheme and let us use a broader and richer range of color.”