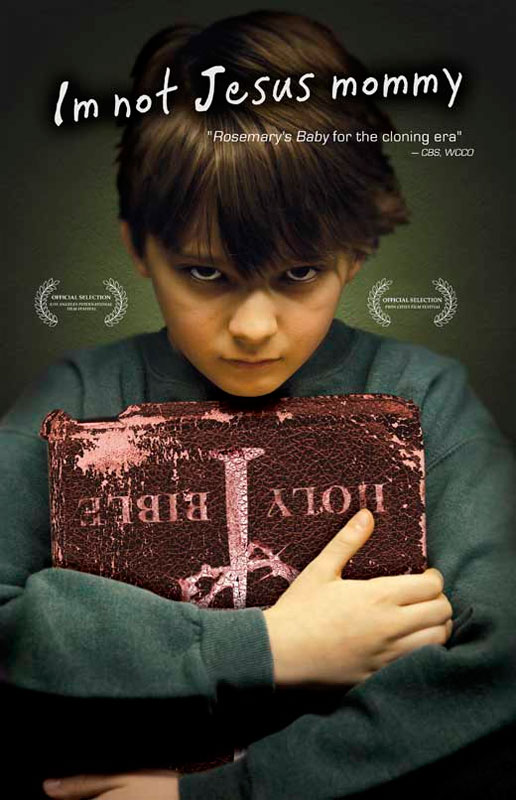 In I’m Not Jesus Mommy, Dr. Kimberly Gabriel, one of the nation’s top fertility specialists, lives in irony as she is unable to have children of her own. Her chance comes when Dr. Roger Gibson recruits her on to his human cloning project.

The film was done with a “Hitchcock-like” approach with off-camera violence and the use of graphic sounds. I’m Not Jesus Mommy tackles controversial and socially fueled topics including human cloning, immigration abuse and the perversion of the world’s religions in a brash and intense vision of our planet’s last days.

Kimberly would stop at nothing to have a child of her own. After recovering from cancer her possibilities seemed slim. However, the world’s first successful human cloning project brings an unthinkable solution and a son named David. Seven years after David’s birth, wars, famine and natural disasters of every kinds have plagued the Earth. As Kimberly struggles to survive her biggest challenge is raising her son. Strange occurrences surrounding the young boy are only becoming worse and more mysterious. Roger, the head researcher of the cloning project returns to reveal that David was cloned from DNA taken from the Shroud of from blood of Christ. Has cloning made it possible to bring Christ back? Is David the Second Coming of Christ or something else?

FilmDemic, the film’s theatrical distributor and marketing partner, has stepped up as the title sponsor of the Minneapolis-St Paul International Film Festival’s (MSPFF) Late Night Film Series. “‘I’m Not Jesus Mommy’ kicks off it’s theatrical run in Minneapolis just one day after the conclusion of the festival. Minneapolis is an ideal place to start the release and we’re excited of the possibilities the MSPFF provides us in terms of eyeballs and great timing,” remarked Vaughn Juares, the film’s director.