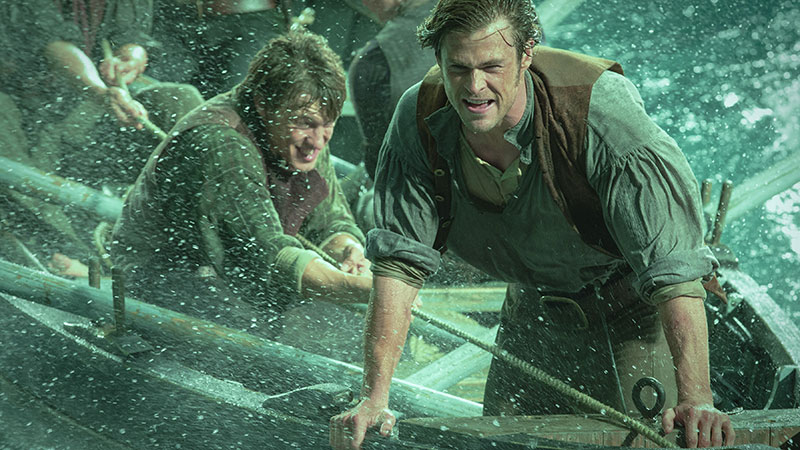 In the winter of 1820, the New England whaling ship Essex was assaulted by something no one could believe: a whale of mammoth size and will, and an almost human sense of vengeance. The real-life maritime disaster would inspire Herman Melville’s Moby-Dick. But that told only half the story. 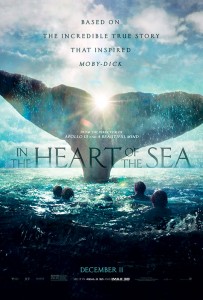 “In the Heart of the Sea” was filmed almost entirely in sequence for several reasons, not the least of which was the gradual change in the characters’ appearances as they waste away from a lack of food and water, as well as shelter from the unforgiving elements.

The extraordinary journey of the Essex and her crew was chronicled by Nathaniel Philbrick in his book In the Heart of the Sea: The Tragedy of the Whaleship Essex. The author and historian, who calls Nantucket home, had a long-held fascination with the industry that had put the small Massachusetts island on the map.

Charles Leavitt, who also shares story credit with Rick Jaffa and Amanda Silver, points out that you have to view the livelihood of these men through the prism of times past. “This is not a movie that glorifies whaling; on the contrary, it shows how brutal it was,” he states. “The whaling industry of the early 19th century was essentially the oil industry before someone figured out how to drill a hole in the ground to get oil from the earth. Whale oil lit the lamps of America and Europe.”

Now, with acclaimed director Ron Howard at the helm, the legend of the Essex, her courageous crew, and that mythic white whale comes to the big screen for the first time in the epic adventure “In the Heart of the Sea.” Howard initially received the screenplay from actor Chris Hemsworth when they were working together on “Rush.” Hemsworth, who stars in the film as Essex First Mate Owen Chase, remarks, “I loved the script from the start.” Howard acknowledges that when Hemsworth initially approached him about the project, “I didn’t know anything about the Essex and didn’t know the script was based on events that were very real.”

Benjamin Walker, who plays the role of Essex Captain George Pollard, posits that the mortal clash between the whalers and the whale is only one component. “There are three great trials encompassed in this story: man against man, man against nature, man against self. How can you overcome those trials and survive? That’s the question of the movie.”

Two actors of different generations play the role of Thomas Nickerson, separated by three decades. Young Tom Holland plays the 14-year-old cabin boy setting off on his first whaling expedition, on the Essex. Veteran actor Brendan Gleeson portrays the man who still bears the scars of his ordeal, although most of them are invisible.

The narration of the film is from Nickerson’s point of view. Cast as the now-legendary author, Ben Whishaw notes, “The film begins with Herman Melville’s hunger for the truth. He has heard whisperings and believes there’s been a cover-up about what really transpired on the Essex. In a way, my character is the catalyst of the film in that he is ultimately able to get Nickerson to tell his story.”

Without question, the white whale plays a pivotal role in the drama, so his creation involved the combined expertise of several departments. The whale was brought to life via CGI by the visual effects team, led by Lerman and VFX supervisor Jody Johnson. Johnson comments, “It was particularly challenging, with a creature of such immense size and power, to push the envelope without going over the edge because we didn’t want to pluck the audience out of this real world and take them into a fantasy realm. Each time we conceptualized an action sequence that involved the main whale, or any of the whales, we sent it off to our experts and we’d discuss how plausible it was and what other behaviors they might suggest.”

What does set this whale apart from anything in our frame of reference is his size: measuring 95 feet long, weighing approximately 80 tons, with a tail spanning 20 feet. By contrast, the other male sperm whales they encounter measure just over half as long, at about 52 feet.

To carry moviegoers effectively to another place and time, the filmmakers recreated the Nantucket of the early-to-mid 1800s at Warner Bros. Studios Leavesden in England.

The production designer set out to locate a ship that could double for the film’s Essex, measuring just over 100 feet in length and divided into sections that served as the officers’ and crew quarters and a lower deck for storing the barrels of oil. The ships were equipped with four or five rowboats, approximately 30 feet long, which were lowered into the water when the lookout hollered “Blow!” upon sighting their prey.

Production designer Mark Tildesley and his team searched the globe for a ship of suitable size and scale and soon discovered, “they’re booked years in advance. But we were lucky enough to find a ship called the Phoenix in Cornwall that’s of similar size to the Essex, though it only had two masts whereas the Essex had three. So that was a small compromise. Like the replica of the Essex, the smaller whaleboats were crafted by real boat builders.

The filmmakers, cast and crew then moved to the island of La Gomera, one of the smaller Canary Islands, becoming the first production ever to shoot there. The Phoenix sailed from the UK to the location, giving members of the visual effects department the opportunity to shoot ocean plates from the deck of the boat during the voyage.