Insidious: Chapter 2 features a multi-generational family dealing with ghost, from grandmother and parents all the way down to young children and a baby. Even the film’s ghost hunters span older and younger generations. The films ventures 25 years into the past to reveal the sinister events at the root of the evil that is hauting the Lamberts.The screenplay is by Leigh Whannell based on a story by James Wan and Whannell. 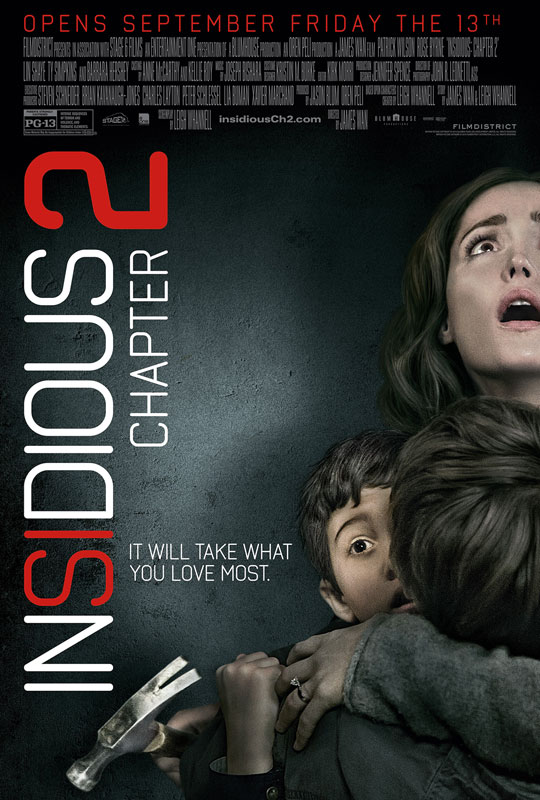 In addition to picking up the tale of the Lambert family where the original left off, Insidious: Chapter 2 explores a larger mythology and backstory for the characters.

Insidious: Chapter 2 reteams director James Wan with most of the filmakers he collaborated with on Insidious, including his director of photography John Leonnetti.

Thanks to Leonnetti’s camera and lightting skills, both Insidious films feature dynamic visual and striking color palettes that belie their modest budgets. “The approach to the tone of Insidious was to capture a very natural and realistic image that we could further manipulate” Leonnetti explains.

The father of the family is Josh Lambert, played once again by Patrick Wilson, who mark his third collaboration with James Wan. According to Wilson “Josh Lambert is literally vacant because he’s possessed, but will Renai find out?” Australian native Rose Byne reprise her role as Josh’s wife, Renai. At the start of Chapter 2, her character is still shaken by the events that transpired in the first film and is spiraling into depression. “It’s literally a day later and she’s on the verge of a nervous breakdown,” Byrne explains.

The filmakers brought back Barbara Hershey to portrait Josh’s mother and the Lambert family matriarch, Lorraine Lambert. The actress notes it’s the first time in her distinguished carrer taht she has been cast in a sequel to one of her own films.

The return of character actress Lin Shaye in the role of hypnotist ans supernatural expert Elise Rainier may come as a surprise to Insidious fans, given that her character was mysteriously killed at the end of the original film.

Filmed entirely in practical locations in Los Angeles, the 26-day shoot on Insidious: Chapter 2 began in January 2013 at the historic Smith Estate, perched on a hilltop in the Highland Park neighborhood in the Northeast Los Angeles. This well-preserved Queen Anne-Victorian house serves as the home of Lorraine Lambert and a temporary refuge for her son Josh and his family after the events at the conclusion of Insidious.