Insidious: Chapter 3, the new movie in the terrifying horror series, is written and directed by franchise co-creator Leigh Whannell. The film is set years before the haunting of the Lambert family, and Elise’s battles with spirits from The Further, in Insidious[1] and Insidious: Chapter 2[2]. In the prequel, teenaged aspiring actress Quinn Brenner (Stefanie Scott) senses that her late mother is trying to contact her, and seeks out a gifted psychic – Elise. 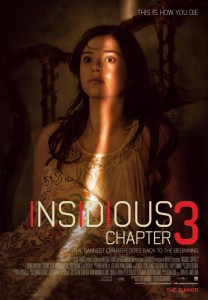 To make his collaborators more comfortable prior to the start of filming, writor/director Leigh Whannell invited actors Lin Shaye, Dermot Mulroney, and Stefanie Scott – among other guests – to his home for “movie night.” He screened the classic The Shining in an outdoor setting to inspire the group.

Producer Jason Blum, whose company Blumhouse has also produced the Sinister, The Purge[4], Ouija[5], and Paranormal Activity[6] franchises, says, “James and Leigh have created their own unique, terrifying world with Insidious, and this chapter takes us deeper and deeper into The Further.” This netherworld is The Further, created by Leigh Whannell and James Wan in the hit movies Insidious and Insidious: Chapter 2.

While dialing up the chills, Insidious: Chapter 3 turns back the clock; it takes place years before the first two chapters which detailed the escalating haunting of the Lambert family. With Whannell, writer and director on the new movie, opines that “people who love a good scare dig the Insidious films. We want audiences to be absolutely terrified.”

While the new storyline has much to offer faithful viewers of the movies, it is also inviting in an audience that can come to the saga fresh. Whannell reminds, “Everyone has fears, no matter what their culture or country. At its core, every ghost story is about death and loss. That is why they are relatable. Insidious: Chapter 3 is no exception; people can see this movie having seen neither of the previous chapters and they will understand what the characters here go through.”

“My approach on this film was to take it back to the realistic horror tone of the first movie, where you’re with a family who don’t know what’s happening to them and can’t imagine what’s to come.”

So it is that in Insidious: Chapter 3, an ordinary family comes under siege: 17-year-old aspiring actress Quinn (Stefanie Scott), 9-year-old tech-geek Alex (Tate Berney), and their widowed father Sean (Dermot Mulroney). Wife and mother Lily’s passing has hurt each member of the Brenner family, but Quinn is particularly sensitive at a vulnerable age and makes the fateful decision to contact clairvoyant Elise in hopes of communicating with Lily.

As it happened, production of Insidious: Chapter 3 overlapped with the making of Wan’s newest movie as director, the big-budget Furious 7[7]. Wan was still able to visit Whannell’s set multiple times – and can be glimpsed on-screen in a cameo role.

Whannell also availed himself of 21st-century technology to seek out a veteran filmmaker whom he admired. He recounts, “Before I started shooting I sent William Friedkin a tweet saying ‘I am directing my first film – do you have any advice for me? Things you wish you’d known before you directed?’ Mr. Friedkin responded right away, ‘Let’s have lunch and talk.’
“It was surreal. I’d never met the guy. I got to the lunch and we barely did ‘hello’ before he said, ‘You’ve got to scare your actors for real. On The Exorcist I fired a gun. Do you think I could’ve gotten the [actor playing the] priest to jump like that [otherwise] when the phone rang [in the scene]?”

Weeks later, in attempting to put the Oscar-winning director’s advice into practice, Whannell sensed that the concept – but not the weapon – was viable. “I used an air horn,” confesses Whannell. “One time only.”