Iron Man 3 is a superhero film featuring the Marvel Comics character Iron Man, produced by Marvel Studios and distributed by Walt Disney Studios Motion Pictures. It is the seventh installment in the Marvel Cinematic Universe, being the first major release in the franchise since the crossover film The Avengers.  Shane Black directed a screenplay he co-wrote with Drew Pearce, which will be based on the “Extremis” story arc by Warren Ellis. 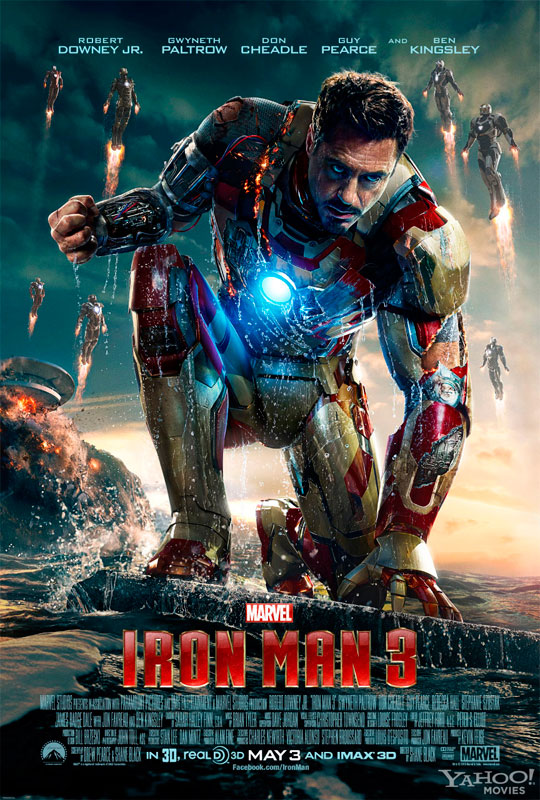 Unlike the first two Iron Man films, Industrial Light and Magic is not involved with the film’s visual effects.

Filming began in Wilmington, North Carolina on May 23, 2012 at EUE/Screen Gems Studios. From June 4 through June 6, filming took place in Cary, North Carolina at the Epic Games headquarters,with a large Christmas tree set up on the front lawn.  A scene was also shot at the Wilmington International Airport.  On set photos in North Carolina featured an actor wearing armor similar to the “Iron Patriot” suit from the comics. It was later reported to be the War Machine armor painted in red, white and blue.

Cast and crew began arriving in Florida on October 1, to shoot scenes on Dania Beach and around South Florida. That same day, Robert Downey Jr. returned to the set after his ankle injury.In early October, scenes were shot at a replica of the Malibu restaurant Neptune’s Net, and filming took place on location at the Vizcaya Museum and Gardens. Scenes were shot during the daytime inside the Miami Beach Resort at Miami Beach on October 10 and 11. The production returned to Wilmington in mid-October for additional filming. On November 1, scenes were shot at the Vizcaya Museum and Gardens and at an abandoned cement factory made up as an Afghanistan village market.