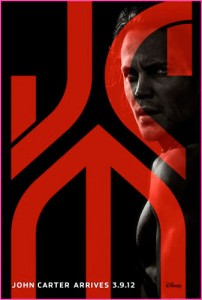 Distributed by Walt Disney Pictures, the film is being was released in the United States on March 9, 2012. Filming began in November 2009 and principal photography spanned from January 2010 to July 2010. This project marks the first time that Andrew Stanton has worked on a live-action film, as his previous work includes the Pixar animated films Finding Nemo and WALL-E. The film is being released in Digital 3D and IMAX 3D formats.

The film is largely based on A Princess of Mars, the first novel to feature John Carter. The novel was originally published as a magazine serial in 1912 and then brought out in book form in 1917. The film tells the story of war-weary, former military captain John Carter (Taylor Kitsch), who is inexplicably transported to Mars where he becomes reluctantly embroiled in a conflict of epic proportions amongst the inhabitants of the planet, including Tars Tarkas (Willem Dafoe) and the captivating Princess Dejah Thoris (Lynn Collins). In a world on the brink of collapse, Carter rediscovers his humanity when he realizes that the survival of Barsoom and its people rests in his hands.

During the late 1950s, Ray Harryhausen expressed interest in filming the novels, but it was not until the 1980s that producers Mario Kassar and Andrew G. Vajna bought the rights for Walt Disney Pictures with a view to creating a competitor to Star Wars and Conan the Barbarian. The project collapsed because McTiernan realized that visual effects were not yet advanced enough to recreate Burroughs’ vision. The project remained at Disney, and Jeffrey Katzenberg was a heavy proponent of filming the novels, but the rights eventually returned to Burroughs’ estate.

In January 2007, Disney regained the rights, acquiring them this time for Andrew Stanton and writer Mark Andrews. Stanton noted he was effectively being “loaned” to Walt Disney Pictures because Pixar is an all-ages brand and John Carter was rated PG-13. By 2008 they completed the first draft for part one of a film trilogy. The first film will be based only on the first novel. In April 2009, author Michael Chabon confirmed he had been hired to revise the script.

Having completed WALL-E, Stanton and Wells visited the archives of Edgar Rice Burroughs, Inc., in Tarzana, California, as part of their research. Jim Morris, general manager of Pixar, said the film will have a unique look that is distinct from Frank Frazetta’s illustrations, which they found dated. He also noted that although he had less time for pre-production than for any of his animated projects, the task was nevertheless relatively easy since he had read the novels as a child and had already visualized many scenes.

The film was originally titled John Carter of Mars, but Andrew Stanton decided to remove “Of Mars” to make it more appealing to a broader audience. As Stanton told Bleeding Cool, John Carter is an “origin story. It’s about a guy becoming John Carter.” Stanton plans to keep “Mars” in the title for future releases in the series.

Jon Favreau stars as Thark Bookie, a Thark who collects the bets of the battles. Jon Favreau was once attached to direct the film when it was still a Paramount production.