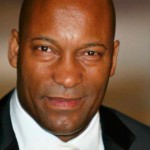 John Singleton mentioned “the film industry is full of all sorts of progressive causes, but when it comes to hiring people of color, it betrays a huge gap between its ideals and actions”. By displaying racial representations as encoded social constructions of identity, John Singleton aims to throw into relief the real meaning of African American lifestyles and identities.

John Daniel Singleton (born January 6, 1968) is an American film director, writer, screenwriter, and producer. He is a native of South Los Angeles and claims that “early day-to-day experiences in the hood” formed his point of view in many of his films like Boyz n the Hood, Poetic Justice, Higher Learning and Baby Boy. Most of John Singleton’s nine films are directly focused around inner city violence that plagues urban life, drug abuse, poverty, gang problems, police corruption/misconduct, unjust educational system/inequality in college admission, cultural bias in standardized testing, etc.

John Singleton was one of the few black students at USC’s prestigious film program, and one that would not “kiss up to anyone” there. While at USC, Singleton felt a sense of alienation, he felt like an outsider and was considered by many to be the “militant black dude” that everyone thought was a “weirdo”.

In his films, Singleton wants the world to see “an inner strength to black men that movies often ignore.” Also portrayed in many of his films is an African-American perspective that is packed with explosive storylines, sociological insight, and hip–hop attitude. Singleton to many movie critics is known as a “headline grabbing iconoclast” who focuses his works on subjects rarely dealt with on film.

Overall, in the film industry there is no certain “definition of authentic blackness, against which Hollywood images could be judged”, therefore directors like John Singleton have “grounding analysis of cinematic representations by reference to the lived experiences of African American”.