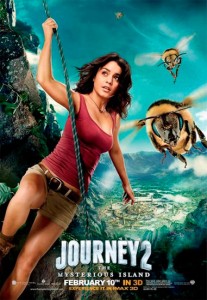 Journey 2: The Mysterious Island was filmed at eight locations on Oahu, Hawaii

After the commercial success of the first film, Walden Media and New Line Cinema purchased Richard Outten’s spec script, Mysterious Travels, in March 2009 to serve as the basis for the film. In the story, the characters embark on a journey to a mysterious uncharted island thought to have informed the writing of three literary classics: Robert Louis Stevenson’s Treasure Island, Jonathan Swift’s Gulliver’s Travels, and Jules Verne’s Mysterious Island. Brian Gunn and Mark Gunn were chosen to revised Outten’s script.

Brendan Fraser and Anita Briem will not return due to scheduling issues, but Hutcherson will reprise his role. Dwayne Johnson will play the husband of Sean’s mother and is forced to come along on a trip with Sean to find his missing grandfather, played by Michael Caine, on a mythical and monstrous island. In October 2010, it was announced that Vanessa Hudgens will play Hutcherson’s love interest.

Journey 2: The Mysterious Island begins when 17-year-old Sean Anderson (Josh Hutcherson receives a coded distress signal from a mysterious island where no island should exist. It’s a place of strange life forms, mountains of gold, deadly volcanoes, and more than one astonishing secret. Unable to stop him from going, Sean’s new stepfather, Hank (Dwayne Johnson), joins the quest.

Together with a helicopter pilot (Luis Guzman) and his beautiful, strong-willed daughter (Vanessa Hudgens), they set out to find the island, rescue its lone inhabitant and escape before seismic shockwaves force the island under the sea and bury its treasures forever.

In May 2010, Warner Bros. and New Line Cinema announced that Journey 2: The Mysterious Island will release on February 10, 2012.

The film was filmed at eight locations on Oahu, Hawaii, but predominantly in various parts of Waimea Valley and Kualoa Ranch. Filming also took place in Wilmington, North Carolina from January 10 to February 10, 2011.