Judy Moody and the Not Bummer Summer is a  comedy film based on Megan McDonald’s Judy Moody book series. The film’s star Jordana Beatty in the main role, Heathet Graham, Parris Mosteller and Jaleel White. 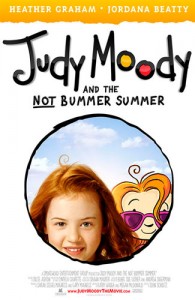 It was Megan McDonald who asked the producers if they would meet with Australian actress Jordana Beatty after learning she had been cast to play another legendary literary character, Eloise, in Eloise in Paris.

Jordana Beatty (Judy Moody) made her feature film debut in Bryan Singer’s Superman Returns. She has been cast in the title role in the forthcoming family film Eloise in Paris, opposite Uma Thurman, which is in development at Handmade Films.

In 2000, the world first met Judy Moody, the amusingly mercurial heroine of Megan McDonald’s bestselling book series. Since then, the adventurous tyke has inspired eight additional books and the series has sold a phenomenal 14 million copies in 23 languages. Now Judy is poised to make her big screen debut in Judy Moody and the NOT Bummer Summer.

Author McDonald is still pinching herself over seeing her creation come to cinematic life. McDonald began her career as a children’s librarian, but transitioned into writing when her fanciful stories became popular with parents and kids. “I wanted to tell some funny stories about growing up with my sisters,” she says. “I am Judy Moody in a way, but she’s grown way beyond the initial things that I based her on. She’s really taken on her own personality.

Producer Sarah Siegel-Magness of Smokewood Entertainment first encountered Judy when her daughter brought the books home as required reading for her third grade class. Siegel-Magness was captivated by the series’ humorous and imaginative take on life in elementary school and saw the independent character as a positive role model for both girls and boys.

At the time, Siegel-Magness and her partner and husband Gary Magness were in the middle of production on the acclaimed 2009 film Precious: Based on the Novel Push by Sapphire, which won two Academy Awards® and was nominated for four more, including Best Picture. A children’s movie might not have seemed the most obvious choice for their next project, but, says Siegel-Magness, “For me, it’s all about the story. I don’t gravitate toward any one particular genre. I like a compelling story that makes me laugh and cry and go through a whole range of emotions. I like a story I can feel passionate about telling.”

The producer was won over by Judy’s optimism, love of family and ability to learn lessons from her mischievous adventures, and believed those qualities would resonate with film audiences and fit Smokewood’s commitment to making films with positive messages. But competition to win the rights to the enormously popular book series was fierce. “It took a lot of patience to get the option,” says Bobbi Sue Luther, executive producer for Smokewood Entertainment. “It was a labor of love for Sarah because she cared so much about this little girl. Sarah is the mother of this movie, and the rest of us all feel like we’re the nannies.”

McDonald was brought on to write the screenplay. Given that it was her first feature script, the author asked the producers to consider bringing on a more experienced co-writer from the worlds of film or television. In fact, she had someone specific in mind: her childhood best friend, Kathy Waugh, who had written for several award-winning children’s programs. Siegel-Magness agreed, and together they got to work developing the concept for a new story.

Many familiar faces from the books appear in the film, joined by an intriguing new character, an adult who matches Judy’s imagination and zest for life. “Mom and Dad go away and Judy’s Aunt Opal comes to stay,” says McDonald. “We spent a good deal of time developing that character and writing a whole backstory for Aunt Opal. She’s very artistic and a little bit outside the box, but not wacky. She sparkles with energy.”

John Schultz is a director with a knack for getting excellent performances from young performers and a history of directing family films that are equally entertaining for children and adults. “He was the first person I wanted to speak with,” says Siegel-Magness. “I love his boyish charm and I knew he was the perfect person for this movie. He’s such a great communicator and he really is just a big kid.”

Schultz and Siegel-Magness connected immediately. “It’s almost as if we’re one brain,” she says. “We always seemed to be on the same path. Judy Moody and the Not Bummer Summer is a female-driven movie and when John came in, he brought in action where we wouldn’t have seen it. That action has made the movie more dynamic and we have John to thank for that.”

It took three years for Siegel-Magness to fulfill her dream of bringing Judy Moody to the big screen. “When we set out on this journey, our goal was to make a timeless family film that would resonate with girls, boys, moms and dads in equal measure,” she says. “We tried to make a film that stayed true to fans of the book series, but also make it accessible enough for new fans.