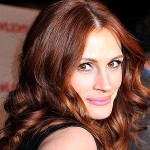 Julia Roberts disclosed in a 2010 interview for Elle magazine that she believes in and practices Hinduism. Julia Roberts is a devotee of Neem Karoli Baba (Maharaj-ji).

Julia Roberts wanted to be a veterinarian as a child. She played clarinet in the band in school. After graduating from Smyrna’s Campbell High School, she headed to New York to pursue a career in acting. Once there, she signed with the Click Modeling Agency and enrolled in acting classes. She reverted to her original name, “Julia Roberts”, when she discovered that a “Julie Roberts” already was registered with the Screen Actors Guild.

Julia Roberts has been named one of People magazine’s “50 Most Beautiful People in the World” eleven times, tied with Halle Berry. In 2001, Ladies Home Journal ranked her as the 11th most powerful woman in America, ahead of then national security advisor Condoleezza Rice and former first lady Laura Bush.Roberts has a production company called Red Om Films.