In May of 1990, Universal obtained the galleys of best-selling author Michael Crichton’s upcoming book “Jurassic Park,” and within a matter of hours, the studio was intently negotiating to purchase the book on behalf of Steven Spielberg. 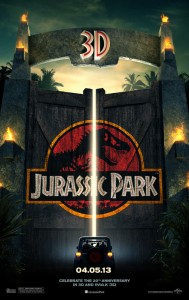 The conversion of Jurassic Park into 3D took nine months to complete.

“It was one of those projects that was so obviously a Spielberg film,” says producer Kathleen Kennedy, who has closely collaborated with the filmmaker for 14 years. “If you look at the body of Steven’s work, he very often is interested in the theme of extraordinary things happening to ordinary people.”

With the 20th anniversary of one of Universal Pictures’ most enduring hits approaching, the studio decided to reissue the film in theaters across the world, approaching theater owners with the idea of a 3D post-conversion for one of Universal’s favorite adventures, stunningly restored in 4K.

As technology shifts and changes the manner in which filmmakers are able to tell stories, 3D has provided the ability to bring audiences into the Jurassic Park that Steven Spielberg was subconsciously shooting.  This type of design not only allows for an unexpected, nostalgic journey for those who embraced the film in 1993, it offers the chance for new audiences to take an unexpected ride alongside Stan Winston’s and Industrial Light and Magic’s (ILM) brilliant creations.

When Steven Spielberg originally shot Jurassic Park, his cast and crew were fortunate enough to be surrounded with a stunning 3D backdrop of Stan Winston’s dinosaur creations to inspire them on set.  Coupled with ILM’s groundbreaking CG and the film’s dramatic human moments, Jurassic Park naturally lent itself to an immersive experience in conversion.

To evolve this epic action-adventure, it took more than 700 artists to isolate each small detail inside of every frame, add depth to the shot and then redimensionalize into 3D to stretch the screen.

Purists fear not!  During the conversion, Spielberg was cautious not to significantly alter scenes from or add new sound effects to the original.  Rather, the goal was laser-focused format enhancement.  Whether it was Spielberg’s addition of rain in the foreground when we first see T. rex or splinters breaking toward our eyes as the Explorer hurtles down the tree, his objective was to make us pay attention to what’s in front of and behind the camera.