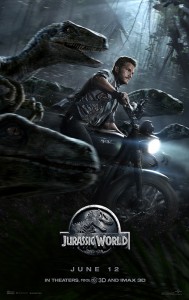 While the shooting crew filmed in Hawaii, a construction crew of up to 400 craftspersons was hard at work prepping the enormous sets in New Orleans.

On board to produce this next installment was frequent Spielberg collaborator Frank Marshall. Brought on to help shepherd the epic film was seasoned producer Patrick Crowley, who has partnered with Marshall since the first film in the Bourne series. Similarly, the veteran producer sensed a readiness to revisit Jurassic Park by those who missed the classic Amblin style of filmmaking.

While countless directors were interested in relaunching one of the most successful and popular franchises in movie history, Spielberg, Marshall and Crowley searched for some time for a creative talent who could honor the spirit and legacy of the franchise and propel it forward creatively. They found their successor in newcomer Colin Trevorrow. A pioneer of the online short film. His work caught the eye of Spielberg and Marshall, who felt his fresh and decisive perspective—rooted in character but delivering in speculative thematics—made him worthy of carrying the torch. Spielberg explains his decision: “I had seen Safety Not Guaranteed and the very last scene was what convinced me that Colin was the right person to direct Jurassic World. ”

Trevorrow and his writing partner, Derek Connolly, aimed to deliver a strong sense of character, scope and intrigue, while answering the most important questions for audiences. Reveals the director: “The questions for us were, ‘Why would there be another installment? What’s a story that we can tell and characters that we can introduce that make all of this worthwhile?’”

Offers Crowley: “An important aspect of all of the Jurassic films is the strength of the characters. They are essentially what drives the storytelling.” In this spirit, Trevorrow sought the ideal troupe of actors to bring these characters to life.

The hero of our story is a man who is as quick in repartee as he is in decisive action: Owen is a military veteran who respects the precarious place of humans in the natural order and now works at a behavioral facility on the outskirts of Jurassic World. For the role, the filmmakers found their hero in comedic actor-turned-action star Chris Pratt. A huge fan of Jurassic Park, Pratt, much like his director, vividly remembers seeing the original film in 1993 in his small-town theater.

Bryce Dallas Howard was brought aboard to portray Claire, the operations manager of Jurassic World, who strives to make every guest’s visit free of worry. Of his leading lady, Trevorrow commends: “Bryce is one of our best actors that we have. She created a woman who starts off just on the borderline of being unlikable. She takes you on the journey, and by the time you get to the end…the ending is hers. ”

For the role of Gray, filmmakers cast young actor Ty Simpkins, familiar to audiences from his work co-starring alongside Robert Downey Jr. in Iron Man 3 and in director James Wan’s Insidious series.

Operational and established as the world’s first international theme park, Jurassic World is the promise of the original park gloriously fulfilled. Trevorrow and his creative team set out to create a magical world that felt more tangible than fantastical. Veteran production designer Edward Verreaux was selected to bring the vision of Jurassic World to life. Beginning his career with Spielberg as an illustrator on Raiders of the Lost Ark and E.T.: The Extra-Terrestrial, Verreaux has served as production designer on massive blockbusters such as X-Men: The Last Stand and Rush Hour 3.

Production began on April 14, 2014, on the island of Oahu at the Honolulu Zoo, which was magically transformed into Jurassic World’s petting zoo. Paying homage to the sacred lands on which the company would be filming while in Hawaii—and to garner some aloha spirit for the complicated shoot ahead—the crew participated in a spiritual blessing ceremony on the first day of principal photography.

With a total of 33 days of filming on the islands of Oahu and Kauai, the team set out to utilize the natural landscape to provide the appropriate scale and scope needed for Jurassic World. Returning to film at Kualoa Ranch on Oahu, Verreaux and his workers built a full-scale dinosaur paddock, which was constructed to house the park’s new genetically modified dinosaur. Kualoa Ranch also provided the backdrop for multiple exterior locations, including Owen’s bungalow, Masrani’s mountainside helipad and the majestic Gyrosphere Valley