Justin Bieber: Never Say Never is documentary-style footage directed by  Jon Chu. It is showing Justin’s musical prowess through the years and follows Justin Bieber with some footage of performances from his 2010 concert tour.

Justin Drew Bieber is a Canadian pop-R&B singer. Bieber was discovered in 2008 by Scooter Braun, who happened to come across Bieber’s videos on YouTube and later became his manager. Braun arranged for him to meet with Usher in Atlanta, Georgia, and Bieber was soon signed to Raymond Braun Media Group (RBMG), a joint venture between Braun and Usher, and then to a recording contract with Island Records offered by L.A. Reid.

His debut single, “One Time”, released worldwide in 2009, charted in the top 30 in over ten countries. His debut release, My World, followed on November 17, 2009, and was eventually certified platinum in the United States. He became the first artist to have seven songs from a debut album chart on the Billboard Hot 100. His first full studio release, My World 2.0, was released on March 23, 2010 and has since received similar success; it debuted at number one and within the top ten of several countries and was certified platinum in the United States. It was preceded by the worldwide top-ten single, “Baby,” in January 2010.

Bieber was born on March 1, 1994, in London, Ontario and was raised in Stratford, Ontario. Bieber’s mother, Pattie Mallette, was 18 years old when she became pregnant with her son. Mallette, who worked a series of low-paying office jobs, raised Bieber as a single mother. However, Bieber maintains contact with his father, Jeremy Bieber, who married another woman and had two children. Bieber’s paternal great-grandfather was a German immigrant to Canada.

As he grew, Bieber taught himself to play the piano, drums, guitar, and trumpet. In early 2007, when he was twelve, Bieber sang Ne-Yo’s “So Sick” for a local singing competition in Stratford and placed second. Mallette posted a video of the performance on YouTube for their family and friends to see. She continued to upload videos of Bieber singing covers of various R&B songs, and Bieber’s popularity on the site grew.

Bieber’s first single, “One Time”, was released to radio while Bieber was still recording his debut album. The song reached number 12 on the Canadian Hot 100 during its first week of release in July 2009, and later peaked at number 17 on the Billboard Hot 100. During fall 2009 it had success in international markets. The song was certified Platinum in Canada and the US and Gold in Australia and New Zealand. Bieber’s first album My World, was released on November 17, 2009. Three consecutive singles, “One Less Lonely Girl”, “Love Me”, and “Favorite Girl”, were released exclusively on the iTunes store and charted within the top forty of the Billboard Hot 100. “One Less Lonely Girl” was later also released to radio and peaked within the top fifteen in Canada and the U.S., being certified Gold in the latter. My World was eventually certified Platinum in the US and Double Platinum in both Canada and the UK. 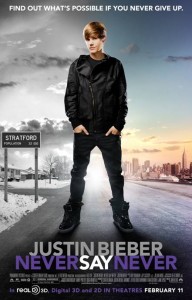 The Observer newspaper in the UK published a report indicating that Justin Bieber is more influential in the social networking sphere than Barack Obama or The Dalai Lama. According to Jan Hoffman of The New York Times, part of Bieber’s appeal stems from his YouTube channel.

On June 23rd, 2010, Bieber went on his first official headlining tour, starting in Hartford, Connecticut, to promote My World and My World 2.0. In July 2010, it was reported that Bieber was the most searched for celebrity on the Internet. That same month his music video, “Baby”, surpassed Lady Gaga’s “Bad Romance” to become the most viewed YouTube video ever. In September 2010, it was reported that Bieber accounted for three percent of all traffic on Twitter, according to an employee of the social-networking site.

Bieber began recording his second album in July 2010 in New York City. At this point, because of puberty, his voice was deeper than it was when he recorded his first album. In April 2010, the singer discussing his vocals remarked, “It cracks. Like every teenage boy, I’m dealing with it and I have the best vocal coach in the world. […] Some of the notes I hit on “Baby” I can’t hit anymore. We have to lower the key when I sing live.” British singer/songwriter Taio Cruz confirmed in July 2010 that he is writing songs for Bieber’s next album. Hip hop producer Dr. Dre produced two songs with Bieber in July 2010 but it is unknown if they were made for the album, which is currently due for a 2011 release.

Bieber guest-starred in the season premiere of the CBS crime drama CSI: Crime Scene Investigation, aired on September 23, 2010. He played a “troubled teen who is faced with a difficult decision regarding his only brother.” Bieber will continue to appear in later episodes of the season as his character’s story progresses. Bieber will also star in a 3-D film about himself directed by Step Up 3D director Jon Chu and scheduled for a February 2011 release.

On 2nd January 2011, The Observer newspaper in the UK published a report indicating that Justin Bieber is more influential in the social networking sphere than Barack Obama or The Dalai Lama. According to Jan Hoffman of The New York Times, part of Bieber’s appeal stems from his YouTube channel. Long before he released his EP, My World, in mid-November, the YouTube videos attracted millions of views.” Braun recognized the appeal. Prior to flying him to Atlanta, Braun wanted to “build him up more on YouTube first” and had Bieber record more home videos for the channel. “I said: ‘Justin, sing like there’s no one in the room. But let’s not use expensive cameras.’ We’ll give it to kids, let them do the work, so that they feel like it’s theirs,” recalled Braun. Bieber continues to upload videos to the same channel and has opened a Twitter account, from which he interacts with fans regularly; his account was reported in November 2010 to have over 6 million followers. The accounts also serve marketing purposes; for example, Bieber’s music video for “One Time” only began selling quickly after it was uploaded to YouTube.

Usher comments that while he and Bieber were both signed at the same age, “I had the chance to ramp up my success, where this has happened to Bieber abruptly.” As a result, Usher, Braun, Bieber’s bodyguard Kenny, and other adults surrounding Bieber constantly coach him on handling fame and his public image. After signing Bieber, Usher appointed one of his former assistants, Ryan Good, to be Bieber’s road manager and stylist. Good, once nicknamed Bieber’s “swagger coach”, created a “streetwise look” for the singer which consisted of baseball caps, hoodies, dog chains and flashy sneakers. Amy Kaufman of The Los Angeles Times comments, “Though a product of a middle-class suburban upbringing in Stratford, Ontario, Bieber’s manner of dress and speech (“Wassup man, how you doin’?” or “It’s like, you know, whateva’ “) suggest he’s mimicking his favorite rappers.”

Bieber is often featured in teen magazines such as Tiger Beat, and has been labeled a “teen hearthrob”.