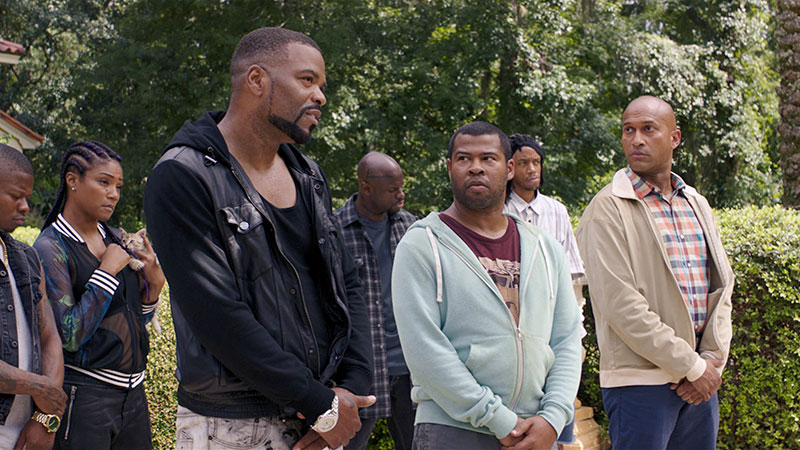 Keegan-Michael Key and Jordan Peele, a.k.a. the hugely popular comedy duo Key & Peele, star in New Line Cinema’s action comedy “Keanu.” The two play Clarence and Rell, cousins who live in the city but are far from streetwise. When Rell’s beloved kitten, Keanu, is catnapped, the hopelessly straight-laced pair must impersonate ruthless killers in order to infiltrate a street gang and retrieve the purloined feline. But the incredibly adorable kitten becomes so coveted that the fight over his custody creates a gang war, forcing our two unwitting heroes to take the law into their own hands. 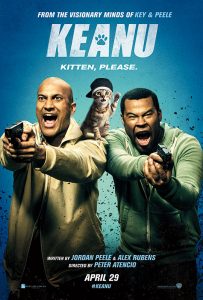 “Keanu” marks the first time the enormously popular comedy pair have, together, brought their talents to the big screen. The title role of “Keanu” is actually played by seven equally adorable brown tabbies, all of which were rescued from shelters.

Peele, who also co-wrote the screenplay with “Key and Peele” writer Alex Rubens, offers, “I wanted to do something crazy and over the top and dark, expanding on the kind of comedy we did in the ‘Key and Peele’ show. The roles of Clarence and Rell were specifically created for Keegan and me, so we could play them in a way no one else could. I know the things that are unique to us, so I knew if we could capture those elements, but in a funny and exaggerated way, we could create something new for us, with characters the likes of which even our fans have never seen.”

Keegan reveals he wasn’t even aware that his partner had been working on a film until Peele asked him to come to a reading of his new script. He recalls, “I didn’t have any idea this was happening, so, as you can imagine, I was pleasantly surprised. When I read it, I thought it was perfect for us.”

For the producers, Peter Atencio was the natural choice to direct “Keanu.” Peter Principato attests, “Peter is a gifted filmmaker who has directed almost all of the ‘Key and Peele’ shows, so they really consider him the third man on their team. He’s got a great eye and had such original ideas for the movie.” Key and Peele both agree. “It’s truly a triumvirate with us and Peter,” says Key. “We’ve worked with him almost exclusively in the television sphere, so we’ve developed this great shorthand between the three of us that works really well.”

Rell isn’t walking alone. At his side is his cousin, Clarence Goobril, played by Keegan-Michael Key. Cast as Hannah, Clarence wife, Nia Long comments, “She is slightly bohemian, but she’s also a perfectionist with a Type-A personality. She wants her husband to stand up for himself. Grow a pair! She finds his constant need to over-explain and over-analyze annoying and unsexy.”

After Keanu is stolen, Rell and Clarence get a major clue as to his whereabouts from Rell’s neighbor—and friendly neighborhood weed dealer—Hulka, played by Will Forte. Peele remarks, “We wrote Hulka as this over-the-hill dude who’s obsessed with old-school hip-hop. The character is actually based on a lot of guys I’ve known in Hollywood, but when we thought of Will, we realized it had practically been written for him.” “Keanu” reunited Forte with Peter Atencio, who had directed him in episodes of “The Last Man on Earth.”

Hulka tells Rell and Clarence that the guys who broke into Rell’s place, and might have Keanu, are former members of the Bloods and the Crips who formed their own gang: the 17th Street Blips. They hang out at an old strip joint called HPV, which was the unfortunate acronym for Hot Party Vixens.
The leader of the Blips, Cheddar, is played by the rapper-turned-actor called Method Man.

The seven kittens used in the film were in two groups, divided by age. Animal trainer Larry Payne explains, “It’s required by the American Humane Association for kittens to be at least twelve weeks old. We rescued the first three at eight weeks so we had four weeks of training, but these guys grow very fast and filming obviously takes place over a longer period of time than the story. We needed to keep the size about the same so we adopted four more kittens for the last few weeks of production.”

As the trainers worked with the kittens, they discovered their particular strengths, which helped determine which one would be used in any given scene. Payne expounds, “Because of their individual personalities, they each might be prone to certain behaviors, so one might be better at sitting and staying, and another at running. We’d rehearse scenes over and over and pick the best two because, by having two ready to go, we could give one a break if the scene was taking a while.”

The other animal on the set wasn’t quite as soothing: an 18-foot reticulated python, ironically named Fluffy. The director emphasizes that one character could not interact with Fluffy. “Keanu was never allowed to be around when the snake came out because a kitten would be like a bag of potato chips to that snake, so we definitely didn’t want them to cross paths.”

Although “Keanu” is set in Los Angeles, the movie was filmed on location in and around New Orleans, Louisiana, in the dead of summer. The combination of heat and stifling humidity proved a challenge to the Californian cast and crew members. The abandoned St. Maurice’s Church in the Lower Ninth Ward became the site of several interior sets, including King Diaz’s drug manufacturing facility and several upstairs rooms in the HPV strip club.

Scenes in the main room of the strip joint were filmed at an actual club in East New Orleans. “I think those were the most fun to shoot,” says Keegan-Michael Key. “Method Man, from Wu-Tang Clan, is a real entertainer and he would go out and keep the crowd going, so it felt like we were literally having a dance party and there just happened to be some cameras around. It was a really festive atmosphere.”

A mansion in the city of Covington, Louisiana, became Bacon Diaz’s palatial estate. Another upscale residence in the nearby village of Folsom was used as the Hollywood Hills home, where a pivotal turn of events tests the mettle of Tectonic and Shark Tank. Clarence and Hannah Goobril’s suburban home was found among a row of craftsman houses in the Gentilly Terrace neighborhood.