Based on crime journalist Peter R. de Vries’s account of what has been called “the most notorious kidnapping of the 20th Century,” Kidnapping Mr. Heineken explores the abduction of Dutch brewery magnate Freddy Heineken (Anthony Hopkins) and his chauffeur, Ab Doderer, who were kidnapped in 1983 and held for what was the largest ransom at the time. 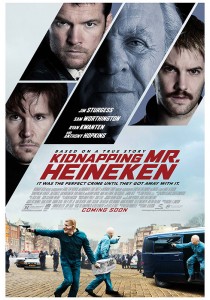 Perhaps most compelling to screenwriter William Brookfield and the producers was the fact that kidnappers were not hardened criminals. They never physically harmed Heineken, and they were not part of any organized crime group. The arduous writing process first resulted in a detailed, sixty‐three page outline. Over the next two years, Brookfield and the producers went through several drafts until the final screenplay was locked.

Actor Mark van Eewen, who plays Frans Meijer in Kidnapping Mr. Heineken, optioned de Vries’s book and facilitated an introduction with Informant Media’s Michael Simpson and Judy Cairo. De Vries had entertained other offers to adapt his book, but was reticent to trust anyone with the material unless he could be assured that history would be represented as accurately as possible. “I spent two or three days with Peter,” Simpson recalls of their first meeting. “He was trying to get a sense of how we would treat the story, if we were interested in doing the actual true crime story, or if we would embellish it in some strange way. I was so fascinated listening to everything I heard. What I quickly understood in talking with Peter is that these were real people. They’re very full-­‐blooded, real people. They’re very complex. They were childhood friends, which I found fascinating.”

The producers turned to UK‐based screenwriter William Brookfield (“Rough Magic”) to adapt de Vries’s book. Brookfield’s biggest challenge was to maintain the integrity of the narrative as he pared down the eight‐hundred page translation into a one­‐hundred-­ and-­ten‐page screenplay. With the script in place, the producers attached director Daniel Alfredson and went to casting director and co‐producer John Papsidera to begin the casting process. “The first person that all of us agreed would be the perfect Freddy Heineken was Anthony Hopkins,” Cairo remembers. “We sent him the screenplay and he was drawn to it. We were thrilled about that.” After the casting of Hopkins, the rest of the ensemble quickly fell in line.

Kidnapping Mr. Heineken was filmed in Brussels, Antwerp, Amsterdam and New Orleans in the fall of 2013. The European leg presented the producers with unusual challenges, namely in replicating the time and place of the crime. As filming was underway in Europe, Simpson and Cairo prepped the New Orleans production. “It was happening simultaneously. We had two crews working full time. While the crew in Europe was shooting, the crew in New Orleans was prepping. The prep overlapped with the shoot. There was a double prep going on on the two continents.”