Killer Elite is an action film distributed by Open Road Films starring Jason Statham, Clive Owen, Yvonne Strahovski, Robert De Niro and Dominic Purcell. The film is based on the 1991 novel The Feather Men by Sir Ranulph Fiennes, and is directed by Gary McKendry. 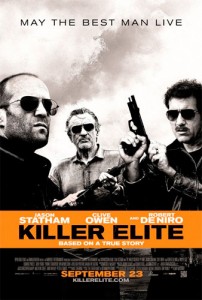 In May 2010, it was announced that Oscar-winning actor Robert De Niro would join the cast, shooting for ten days in a small role as an assassin. Robert De Niro filmed a scene in Melbourne’s Spring Street set in 1970s Paris.

Some London scenes was filmed in Cardiff – on July 29, Robert De Niro and Statham were seen filming outside The Promised Land Bar on Windsor Place.

On July 28, 2010, location filming took place near the Storey Arms outdoor centre, in the Brecon Beacons. A number of 1970’s period cars were in evidence, particularly a bright orange Austin Maxi. The peaks of Pen Y Fan are accessible from this location, and are known to be used by the SAS as part of their selection process and ongoing training.

Killer Elite is about Sir Ranulph Fiennes’ novel, controversially claimed to have been based on actual events, concerns a series of assassinations of members of the British Special Air Service (SAS) by a hit squad called “The Clinic”. The “Feather Men” of the title is a group of vigilante special forces members who take on the hit men to protect members of their regiment.