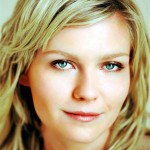 Exploring work behind the camera, as well, Kirsten Dunst made her directorial debut with the short film Welcome, starring Winona Ryder, which screened at the 2008 Sundance Film Festival

Kirsten Caroline Dunst (born April 30, 1982) is an American actress, singer and model. Kirsten Dunst got her showbiz start at the age of three, when she began filming television commercials.  With more than 50 commercials under her belt, she made the jump to the big screen in 1989 in Woody Allen’s New York Stories.

Kirsten Dunst was born in Point Pleasant, New Jersey. Her father worked as a medical services executive, and her mother was an artist and one-time gallery owner.Dunst’s father is German, originally from Hamburg, and Dunst’s mother, who was born in New Jersey, is of German and Swedish descent (Dunst affirmed her German citizenship in 2011 and now holds passports as a dual citizen of the United States and Germany).

Until the age of eight, Dunst lived in Brick Township, New Jersey, where she attended Ranney School. In 1991, her parents separated, and she subsequently moved with her mother and younger brother to Los Angeles, California, where she attended Laurel Hall School in North Hollywood.

Dunst was treated for depression in early 2008 at the Cirque Lodge treatment center in Utah. She has also gone public detailing her “sedate lifestyle” and the fact that she has a single apartment in New York with one bedroom.