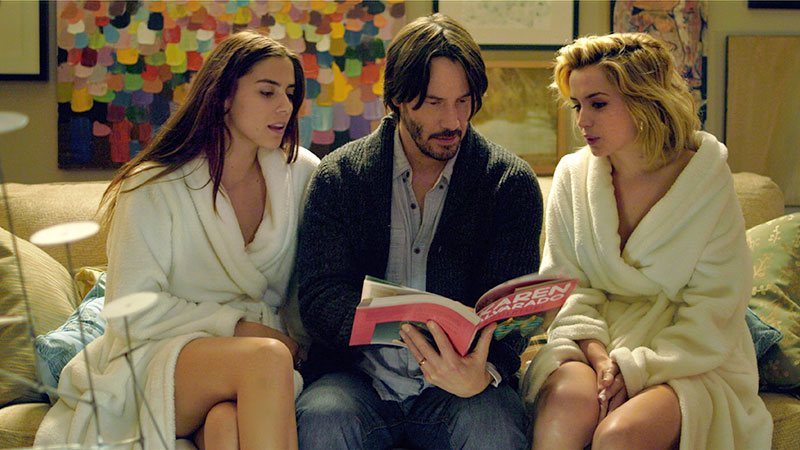 When a devoted husband and father is left home alone for the weekend, two stranded young women unexpectedly knock on his door for help. What starts out as a kind gesture results in a dangerous seduction and a deadly game of cat and mouse. 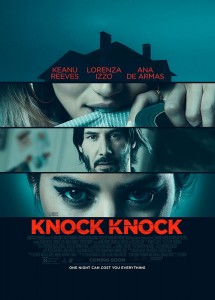 With Knock Knock, I wanted to see “Fatal Attraction” in the age of social media, when what you do in the privacy of your own home suddenly becomes property of the entire world. – Writer/Director Eli Roth

A sexy new thriller from director Eli Roth, Knock Knock stars Keanu Reeves as the family man who falls into temptation and Lorenza Izzo and Ana de Armas as the seductresses who wreak havoc upon his life, turning a married man’s dark fantasy into his worst nightmare.

I’ve always been fascinated by the desire to leave your safe environment to explore the world and the terrible dangers that can lead to. My first films, “Cabin Fever,” “Hostel” and “The Green Inferno” all follow intelligent but sheltered upper-middle class students who travel to all corners of the Earth in search of life experience and wind up wishing they had never left home. After filming in an isolated village in the Peruvian Amazon for “The Green Inferno,” I realized I couldn’t go much further. This led me to wonder…what happens when trouble comes to your own home? What if temptation arrives at your doorstep, and once you let it inside the safest place you know – where you feel completely in control – you unknowingly unleash Pandora’s Box? What happens when your own private world you control gets taken over by an outside force and everything you’ve built begins to crumble around you?

For someone my age, Instagram, Vine, and Twitter do not matter. Even Facebook is not as much of a priority if you are an established professional with a family. But that doesn’t mean the people in their 40’s aren’t curious about that generation. Time and time again my married friends have turned to me slyly and asked “what’s it like? Are the girls their 20’s that much crazier today than when we were 20?” Social connectivity has shattered boundaries of what ages are appropriate to date, and social media has made it permissive for everyone to openly “like” each other in ways they never could before. In the age of internet pornography, nothing seems shocking when everything that was once banned is now available on your phone. What if you were happily married with kids, but for just one night left the safe, comfortable environment you’ve spent a lifetime building to see what it’s like to have sex with this new, open generation to whom nothing seems shocking?

Artwork plays a major role in the film. My mother is an artist, and I grew up with her paintings all over our house, and eventually was lucky enough to see them in galleries in New York, Boston and Chicago. I’ve seen first-hand how difficult it is to create, and what it takes to fill an empty canvas with imagination and soul. In fact, my mother in many ways is my biggest influence on my own career as a writer/director. Yet art, at the core of it, might simply be a concept that does not exist.

Proving the existence of art is like proving the existence of God. The evidence is everywhere, yet it only exists because someone labels it as art. To one person a sculpture might be a priceless work of art, yet to another it might just be colored plaster. I am well aware of my reputation for bodily harm and dismemberment, and with Knock Knock wanted to substitute chopping off the sculpture’s limbs for a human’s. I find the destruction of art much more painful, because the idea that no matter what we create it’s completely worthless to another person is a very real and terrifying one.