Larry Crowne is a comedy-drama film starring Tom Hanks, Julia Roberts, and Bryan Cranston. The film is directed by Hanks and written by Hanks and Nia Vardalos. 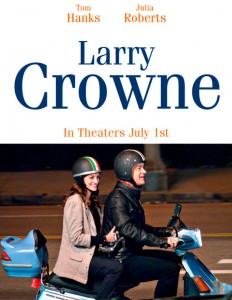 Summit Entertainment originally intended to distribute Larry Crowne in the United States and Canada, but Universal Pictures claimed the distribution rights. Optimum Releasing will release the film in the United Kingdom.

Oscar winners Tom Hanks and Julia Roberts reunite for a dramatic comedy about how the hard knocks from today’s recession inspire one everyday guy to undergo a personal reinvention: Larry Crowne.

Larry Crowne was first announced as Talk of the Town in February of 2006. Universal Pictures set up the project as a star vehicle for Tom Hanks with Nia Vardalos hired to write the screenplay about a man who goes through an unexpected career change. In January of 2010, Julia Roberts was cast opposite Hanks. In the following October, Bryan Cranston joined the cast. Later in the month, filming began in Los Angeles.

Until he was downsized, affable, amiable Larry Crowne (Tom Hanks) was a superstar team leader at the big-box company where he’s worked since his time in the Navy.  Underwater on his mortgage and unclear on what to do with his suddenly free days, Larry heads to his local college to start over.  There he becomes part of a colorful community of outcasts, also-rans and the overlooked all trying to find a better future for themselves…often moving around town in a herd of scooters.

In his public-speaking class, Larry develops an unexpected crush on his teacher Mercedes Tainot (Roberts), who has lost as much passion for teaching as she has for her husband.

The simple guy who has every reason to think his life has stalled will come to learn an unexpected lesson: when you think everything worth having has passed you by, you just might discover your reason to live.