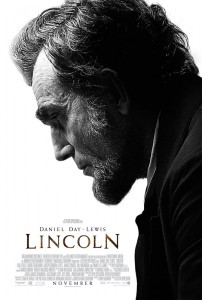 Filming began Monday, October 17, 2011 and ended on December 19, 2011. The film is scheduled for limited release on November 9, 2012 and wide release on November 16, 2012 in the United States by Disney’s Touchstone distribution label in the U.S. and January 25 in the United Kingdom, with distribution in international territories, including the UK, by 20th Century Fox. The timing of the film’s release coincides with the 150th anniversary of the days leading to the issuance of the Emancipation Proclamation.

While consulting on a Steven Spielberg project in 1999, Goodwin told Spielberg she was planning to write Team of Rivals, and Spielberg immediately told her he wanted the film rights. DreamWorks finalized the deal in 2001, and by the end of the year, John Logan signed on to write the script. His draft focused on Lincoln’s friendship with Frederick Douglass. Playwright Paul Webb was hired to rewrite and filming was set to begin in January 2006, but Spielberg delayed it out of dissatisfaction with the script. Neeson said Webb’s draft covered the entirety of Lincoln’s term as President.

Tony Kushner replaced Webb. Kushner considered Lincoln “the greatest democratic leader in the world” and found the writing assignment daunting because “I have no idea [what made him great]; I don’t understand what he did anymore than I understand how William Shakespeare wrote Hamlet or Mozart wrote Così fan tutte.” He delivered his first draft late and felt the enormous amount written about Lincoln did not help either. Kushner said Lincoln’s abolitionist ideals made him appealing to a Jewish writer, and although he felt Lincoln was Christian, he noted the president rarely quoted the New Testament and that his “thinking and his ethical deliberation seem very talmudic”.

He denied any interest in portraying Lincoln as homosexual – as had been speculated due to Kushner’s sexuality – because “there’s [not] enough evidence one way or the other to make a definitive statement about Lincoln’s sexuality”. By late 2008, Kushner joked he was on his “967,000th book about Abraham Lincoln”. Kushner’s initial 500-page draft focused on four months in the life of Lincoln, and by February 2009 he had rewritten it to focus on two months in Lincoln’s life when he was preoccupied with adopting the Thirteenth amendment.

Filming took place in Petersburg, Virginia. According to location manager Colleen Gibbons, “one thing that attracted the filmmakers to the city was the 180-degree vista of historic structures” which is “very rare”. Lincoln toured Petersburg on April 3, 1865, the day after it fell to the Union Army. Scenes have also been filmed in Fredericksburg, Virginia and at the Virginia State Capitol in Richmond, which served as the Capitol of the Confederacy during the Civil War.Abraham Lincoln visited the building on April 4, 1865, after Richmond fell to the Union Army.