Locke directed by Steven Knight, starring Tom Hardy as Ivan Locke, is set almost entirely in a car. Ivan’s is the only face we see; the other characters are the voices at the other end of his sometimes angry, sometimes funny, often shattering telephone calls. The backdrop is a hypnotic vista of motorway lights, illuminating Ivan’s face as well as the demons he is battling and the choices he is making. 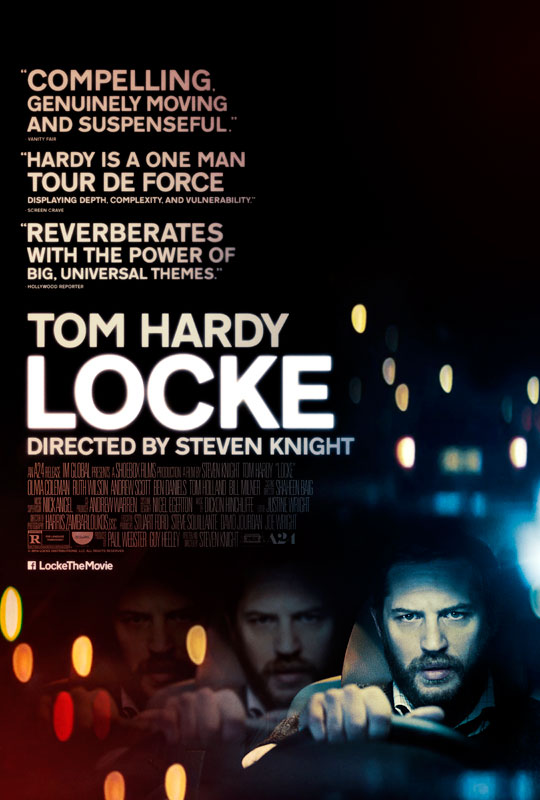 Finding the right director of photography for a film set almost entirely in a car was almost as essential as finding the right lead actor. Guy Heeley had worked with Haris Zambarloukos before on two previous films and knew he had recently done a series of car sequences for the CIA thriller Jack Ryan using the RED Epic camera.

The concept was inspired by a series of camera tests Knight had done for Hummingbird in which he had shot the view from a moving car using an Alexa camera. “It was mesmerising,” recalls Knight of the footage. “Cities and roads at night are beautiful, I could look at them for hours. And so I started thinking about whether you could tell a story that all takes place within a vehicle.”

Knight never had anyone else in mind for the role of Ivan Locke than Tom Hardy and his finely calibrated performance has rewarded that belief. “Tom is one of those people who, as soon as they are on screen, all eyes are on him,” Knight says.

Knight’s intention to shoot the entire film each night was attractive to Hardy. “This method is very actor-friendly, they love it,” Knight says. “As an actor, you want a length of time to get into your character. Normally when you’re filming it’s a line here, a line there, it’s difficult. This way really gives everyone a chance to get into it.”

Olivia Colman, who plays Bethan, is one of the UK’s most in-demand actors. She compares the audience’s perspective to being a passenger in Ivan’s car.

Just five weeks after Knight delivered the first draft, Locke started four days of rehearsals before beginning eight nights of principal photography on February 18, 2013.  With only eight days to shoot the film, and just six of those with Hardy, the production team went through a rigorous ‘what if’ process. “It couldn’t go wrong. We had to cover every single base,” says Heeley. “Given that on paper it was one of the simplest films I’ve ever been involved with, it was one of the longest production meetings I’ve ever been in.”