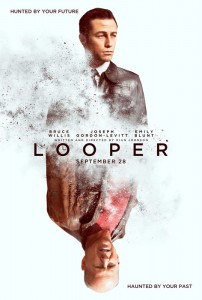 In the film, Joe, played by Joseph Gordon-Levitt, is a “looper”, Old Joe (Bruce Willis) a hit man for the mob. When future gangsters want to rub somebody out, they send the target back in time, where Joe is waiting to do him in. After all, what better place to hide a body than in the past?

In the futuristic action thriller Looper, time travel will be invented – but it will be illegal and only available on the black market.  When the mob wants to get rid of someone, they will send their target 30 years into the past, where a “looper” – a hired gun, like Joe (Joseph Gordon-Levitt) – is waiting to mop up.  Joe is getting rich and life is good… until the day the mob decides to “close the loop,” sending back Joe’s future self (Bruce Willis) for assassination.  The film is written and directed by Rian Johnson and also stars Emily Blunt, Paul Dano, and Jeff Daniels.  Ram Bergman and James D. Stern produce.

The film noir combines strong corporate influences for dealing with criminal organizations, technology for the time-travel machine, as well as a bloody plot. It has been selected to be the opening film of the 2012 Toronto International Film Festival.

Looper has been rated R by the Motion Picture Association of America for strong violence, language, some sexuality/nudity and drug content.

Looper re-teams Gordon-Levitt with Johnson, who have remained good friends since filming the independent hit Brick some years ago.  “Rian and I first met nearly ten years ago,” says Gordon-Levitt.  “It wasn’t too long after we shot Brick that he started telling me about his idea for Looper,   He ended up writing the lead character for me, which is the first time that’s ever happened to me as an actor, so to play that was a great honor.”

“When Joe and I first spoke about Looper, just after we made Brick, it was just the premise of the movie,” says the writer-director.  “What I liked about the idea was the predicament that Joe finds himself in – he knows what the future holds, and he has to make a moral choice about which way it’s going to go.”

Producer Ram Bergman – who previously produced Johnson’s first two films, Brick and The Brothers Bloom – says that working with a writer-director like Johnson is a rare treat.  “He’s just so talented, unique, and nice,” says Bergman.

In creating the time-travel story, Johnson kept things simple.  “You get put into the machine in the 2070s and you get sent back – bang! – thirty years to a predetermined site,” he explains.  “The time machine is set at a fixed interval – you can’t dial it up or down,” says Johnson.  “So as time keeps going forward in 2074, the point a person is going to be sent back to the 2040s keeps sliding forward as well.”